Global demand for smartwatches grew considerably throughout the end of 2018, Strategy Analytics reports, and Apple has both a majority share and a comfortable lead over its top rivals. But the equation has shown signs of changing as second-place Samsung and third-place Fitbit continue to expand their product lines and distribution.

It’s worth noting that all of the companies shipped significantly more smartwatches than they had one year ago. Overall shipments were up 56 percent year over year, with Apple alone seeing an 18 percent jump in the quarter, and a 27 percent jump in 2018 over 2017, for a total of 22.5 million Apple Watches shipped. Industry-wide, 45 million devices were shipped in 2018.

That said, Apple’s relative market share dipped from 67.2 percent in the fourth quarter of 2017 down to 50.7 percent in the fourth quarter of 2018, as Samsung and Fitbit nearly tripled their shipments, eating into Apple’s lead. According to Strategy Analytics, the change came from increased popularity of the new Galaxy Watch and should be sustained by the affordable new Galaxy Watch Active, while Fitbit’s Versa watch and Care health platform are driving more of its demand. 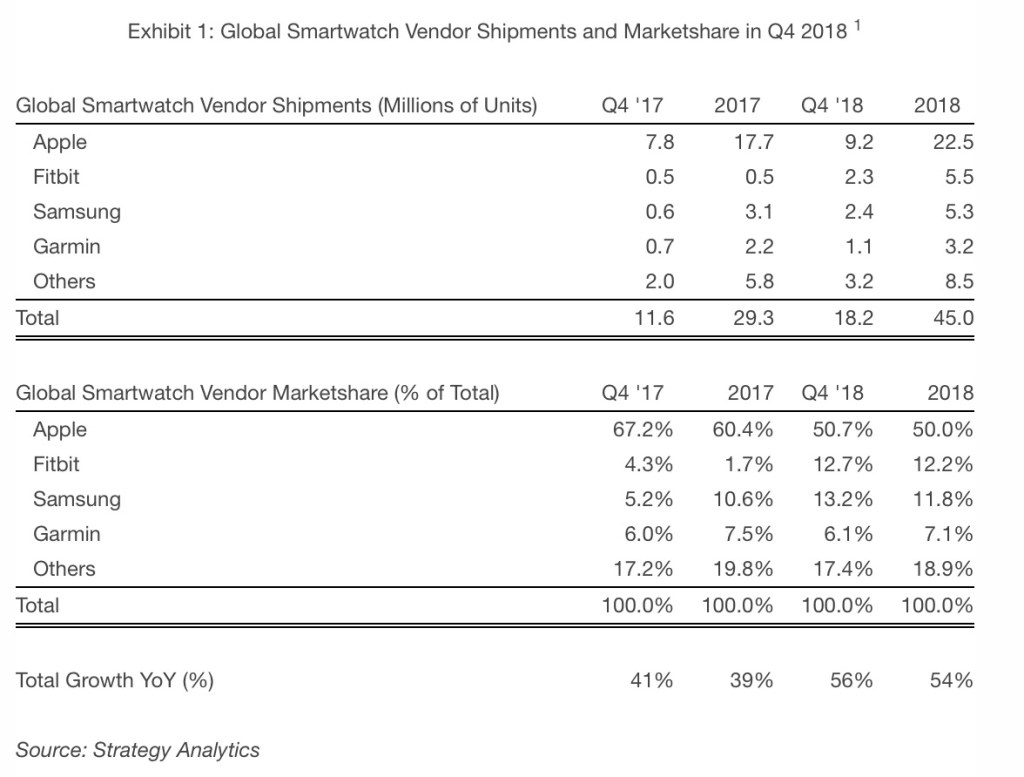 “Rising competition from Fitbit, Samsung, and others in the sports and music categories is making it harder for Garmin to make headway in smartwatches,” explained strategy analytics executive Neil Mawston. “Combined together, Apple, Samsung, Fitbit, and Garmin are the big four players, accounting for eight in 10 of all smartwatches shipped worldwide.”

Over the past year, Apple introduced a more expensive Apple Watch Series 4 and dropped the price of the Apple Watch Series 3 without setting a new low entry price for the family. By comparison, Samsung’s just-announced Galaxy Watch Active will replace its Gear Sport watches at a more aggressive $199 entry price, and its new Galaxy Fit activity trackers are expected to be even more affordable.