A new Forrester study on Google Glass might just show that Apple’s apparent obsession with the wrist might be a better bet than Google’s focus on the face.

According to the study of 4,600 adults, 12 percent of us would want to purchase wearable technology, like glasses, on our face. That’s almost 22 million Americans. But more than twice as many — 28 percent — are interested in wrist-based wearable devices. That’s almost 50 million people.

Apple’s rumored wearable, of course, is the iWatch.

The post-PC wearable computing space is intensely interesting to Apple, chief executive officer Tim Cook said recently. Apple has reportedly been testing 1.5-inch OLED screens for iWatches and has recently filed trademarks for iWatch in Russia and other countries. Bitter global rival Samsung is supposedly working on a wrist-based computing device as well.

In a recent interview, Cook said the entire wearable computing space was “ripe for exploration” and as game-changing and revolutionary as the smartphone or the tablet: “I see it as another very key branch of the tree.”

But while he was excited about wearable devices, Cook wasn’t so keen on the face, saying that Google Glass was limiting its potential based on the fact that it is, essentially, head-mounted — and most people don’t want to wear glasses.

“I wear glasses because I have to — I can’t see without them — but I don’t know a lot of people that wear them that don’t have to,” Cook said. “People who do wear them generally want them to be light, unobtrusive, probably want them to reflect their fashion, their style … from a mainstream point of view this [pointing at his head] is difficult.”

The Forrester result syncs with an April study by ChangeWave, which said that a full one-fifth of U.S. consumers were interested in buying an Apple iWatch — sight unseen. And it fits with a recent trend toward personal fitness monitors such as Jawbone’s Up, the Fitbit, and Nike FuelBand — all of which are worn on the wrist.

But the wrist doesn’t come without some complications. 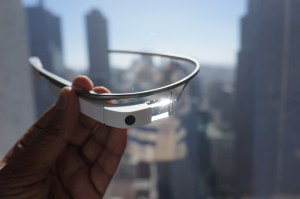 “I bought the Pebble wristwatch on Kickstarter,” a founder recently told me. “But I stopped wearing it because all the alerts and notifications caused me to look down at my wrist too often, and people I was meeting with or talking to thought I was being rude.”

Interestingly, even more people — 29 percent — are interested in wearable computing devices that are clipped onto their clothing. Startups like OMsignal in Montreal are embedding sensors right into your clothing to monitor your health, your exercise, and even your mood.

Whatever Apple has up its sleeve, the company better drop it down into the open and onto its wrist fairly soon. Google has said Glass will be commercially available this year, and Apple won’t want to let Google get a head start on penetrating the market.

Unless, of course, we all cyborg ourselves and start wearing iWatches, Glass, FuelBands, and sensors in our clothing to boot.