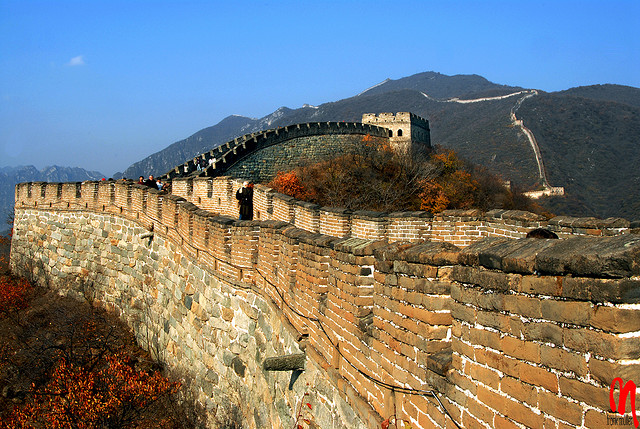 China will account for 26.5 percent of all smartphones sales in 2012, compared to 17.8 percent for the USA, according to a new study released today by the IDC.

That compares to last year’s numbers of 21.3 percent for the U.S and 18.3 percent for China. Other major markets for smartphones include the U.K., India, and Brazil, with 5.3 percent, 2.2 percent, and 1.8 percent of the global market in 2011, respectively. Of those countries, India and Brazil will continue to increase their growth rate in 2012, but the U.K.’s growth rate will slow. 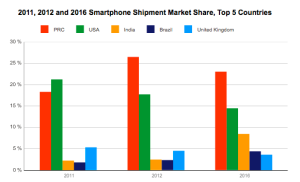 The other 50 percent of the global market is spread among a conglomeration of other countries.

This is not shocking news — that’s what a growth rate of 26 percent for China and only 11.6 percent for the U.S. will do. The shift in market leadership for smartphones is natural outflow of four factors: Android phones getting cheaper, high smartphone market penetration in America, a growing Chinese middle class, and China’s immense population.

Significantly, most of the growth is going to Android phones, not Apple iPhones.

The Chinese may love iPhones, but the pricy status symbol is out of reach for many who are not willing to sell a kidney to acquire the latest shiny Cupertino toy. Android phones in the sub-$100 category are driving huge adoption in China, according to the IDC.

The same factor will also boost Android sales in developing markets such as Brazil, India, and Russia, which isn’t even on the chart today.

Smartphone shipments will continue to increase in the U.S., U.K., and other early market leading countries, but the growth rate is shifting to emerging markets. Within large countries such as China and India, penetration of smartphones is now starting to take off in second-tier cities, according to IDC analyst James Yan.

“After going through a period of sustained high growth, top-tier cities are likely to see decelerating smartphone growth rates,” Yan said. “In contrast, secondary cities are expected to experience accelerated smartphone growth, with strong demand for low-cost models as well as high-end models, which are desired as status symbols.”