The Surface 2 is everything the original Surface should have been. It’s fast, versatile (it can finally sit on your lap!), and at $449, it’s priced to compete with other big tablets.

Perhaps most intriguing, it shows that Microsoft’s initial bet on hybrid computing devices, one that sits between a laptop and tablet, is beginning to pay off.

But even though the Surface 2 is a great piece of hardware, the lack of killer Windows 8 apps holds it back. Since it runs Windows RT 8.1, a special version of Windows 8 for mobile processors, the Surface 2 can’t run older Windows software like Lotus Notes or your favorite games — just the more modern, tablet-oriented Windows apps sold through the Windows App Store. That means the Surface’s prospects are entirely tied to the health of the Windows 8 ecosystem.

With over 120,000 apps, the Windows 8 ecosystem is certainly much healthier than it was last year, but it’s not out of the recovery room just yet. Until Microsoft brings it to full strength, with better quality apps and popular titles, the Surface 2 going to be an imperfect device.

That being said, I found the tablet to be a far better when it comes to pure productivity than anything from the Android and Apple camp thanks to the inclusion of full Office apps and decent multitasking. And as more Windows 8 apps appear, it will only get better.

Last year, Microsoft launched both Windows 8 and the first Surface around the same time. Bugs, annoyances, and glaring feature omissions were par for the course. Now, it’s clear that Microsoft has learned from most of its past mistakes.

The good: Improvements all around

I wrote this entire review on the Surface 2 using the Type Cover (the one with physical keys) – and, sad as it may be, that’s more than I can say for the first Surface. After spending 30 minutes struggling to string a few sentences together on that device, I ran back to my trusty desktop to pound out a scathing review.

But the Surface 2 does more than just get the basics right: Its screen is the same 10-inch 1080p resolution beauty as the Surface Pro, not a low-res clunker like the first Surface. The display is bright and sharp, even in direct sunlight, and it’s viewable from wide angles (so anyone joining you for an impromptu TV marathon won’t just see mushy colors).

While its design appears the same as the first Surface, it’s actually slightly lighter, weighing less than 1.5 pounds. Most people likely won’t notice the difference — though judging from what I remember about the Surface RT, the Surface 2 is slightly easier to hold with one hand. (You can also add on between 0.4 pounds an 0.55 pounds with the additional keyboard covers.)

It’s hard to be too impressed with the Surface 2’s weight, though, when the iPad Air now weighs in close to 1 pound. 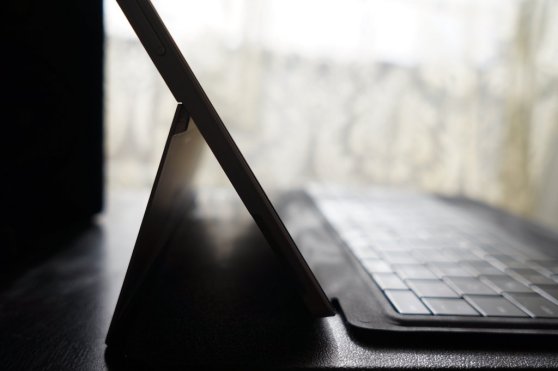 The Surface 2 is also powered by a significantly faster Nvidia Tegra 4 processor and 2GB RAM, so it can juggle several apps at once more easily than the Surface 1 could (which often had trouble running even a single app). I was able to run several Windows 8 apps, Office apps, and several tabs on the desktop version of Internet Explorer before the Surface 2 began to slow down.

You’ll likely feel limited by the Surface 2 if you try to use it as a complete replacement for your laptop, but when compared to the latest iPads and Android tablets, it’s more than speedy enough.

Microsoft claims that the Surface 2 can play video for 10 hours straight, a 25 percent improvement over the first model. Using it as my primary computer for a few days, the Surface 2 managed to survive for an entire day. Some days, it even had a decent chunk of battery life left over from the previous day. Overall, its battery life seemed on-par with what I’ve seen from most big tablets.

The Surface 2 can also finally fit on your lap thanks to an improved kickstand that supports two positions. Judging from my chats with several Microsoft representatives, the company’s initial testing led it to believe that people would mainly use the Surface on flat surfaces for typing. That limitation ended up being one of the most glaring flaws of the first Surface (and it made Microsoft seem particularly out of touch, as if it didn’t know people actually used laptops on their laps). 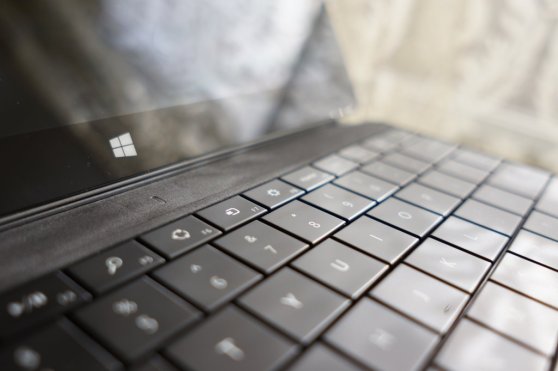 Microsoft also upgraded both of the Surface’s keyboard covers to make typing a far better experience this time around. The touch-enabled Touch Cover 2 ($120) is even thinner than the original and has 10 times as many touch sensors (which means it’s better equipped to survive the onslaught of fast typists). The Type Cover 2 ($130), which sports physical keys, is also thinner and has backlit keys. Both covers are massive improvements over Microsoft’s original Surface covers (and they’re also compatible with older Surfaces as well).

And an entirely new entry, the Power Cover, offers up to a 50 percent battery boost and has physical keys. But it’ll cost you: The Power Cover costs $200 when it’s available next year, and it’s slightly heavier than the other cases.

It’s not just the hardware that makes a difference with the Surface 2: Windows RT 8.1, the first major update for Windows RT, also seems to have fixed many of the stability issues that I had with the first Surface. The new version of RT includes most of the features of the full version of Windows 8.1, like better Start screen customization and more flexibility in multitasking. Unfortunately, it still can’t run older Windows applications — a shortcoming that Microsoft is extremely unlikely to ever fix, given that Windows RT is designed for a different class of processors. Another big plus: It crashes far less than Windows RT on the original Surface.

For people whose lives revolve around Microsoft Office documents, the Surface 2 is their dream tablet. No other tablet platform offers full Office apps, nor do they multitask as well as the Surface (just try juggling a document with multiple windows of emails, web pages, and more – it can’t be done on the iPad or Android). The Surface 2 tackled every Word, Excel, and PowerPoint document I threw at it.