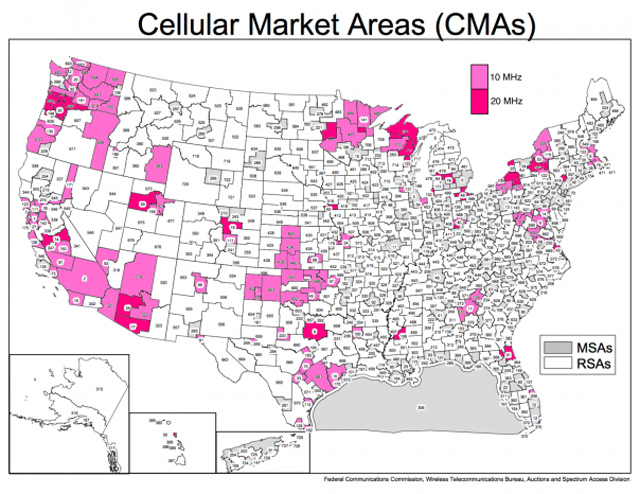 With the AT&T/T-Mobile merger dead, AT&T is readying to compensate T-Mobile with precious mobile spectrum that covers 128 cellular market areas. But what exactly does that look like on the U.S. map?

The fine folks at GigaOM and spectrum expert Andrew Shepherd have developed a handy map, shown above, that shows exactly where T-Mobile will be getting new spectrum additions, which will help the company improve its own 4G offerings.

As noted on the map, cities that will be getting a boost in T-Mobile coverage include Boston, San Francisco/Oakland, Washington, D.C., Houston, Baltimore, Atlanta, San Diego, Seattle, Kansas City, Mo., San Jose, San Antonio, and Salt Lake City. AT&T very carefully picked the cities it could give up spectrum in to make sure it could still launch a decent-sized 4G LTE network in those cities.

The catastrophic breakup fee from the AT&T-T-Mobile merger not only included the spectrum noted above but also will give T-Mobile a broad 3G roaming agreement that will make life easier for T-Mobile customers out of range. On top of doling out valuable spectrum and the roaming agreement, AT&T had to pay $3 billion in cash to T-Mobile parent Deutsche Telekom.

With this loss of spectrum, AT&T has little choice but to look to new deals to get its hands on more spectrum. One option could be for AT&T to buy Dish Network. Dish owns lots of wireless spectrum to deliver its television service to customers and has even talked in the past about partnering with T-Mobile to offer wireless phone service. Previous reports suggested that AT&T could pay as much to $50 a share for Dish, which would be a considerable premium on its stock.