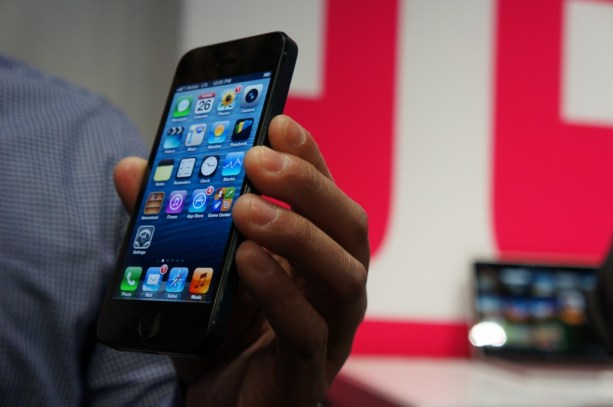 The T-Mobile iPhone is real, and it’s here.

T-Mobile’s version of the iPhone 5 will land on April 12, the carrier revealed today during its ‘uncarrier’ press event in New York City (which we’re following live).

While T-Mobile is doing away with phone subsidies, that doesn’t mean hopeful iPhone 5 owners have to pay for the whole phone upfront. Instead, customers can pay $99 initially and cover the rest in $20 payments over the following 20 months.

T-Mobile’s angle here is pretty clear. “You love your iPhone, you hate AT&T. I want you to get used to that tone, because that is how we are going to play,”  T-Mobile CEO John Legere said back in December.

Also great news for T-Mobile customers is that iPhone 5 will be compatible with T-Mobile’s brand spankin’ new 4G LTE network, which it officially launched today.

Alongside the iPhone 5, T-Mobile is also getting the iPhone 4 and iPhone 4S, which customers can pick up for through its Simple Choice plans for $15 and $70 down, respectively.

The annoucement is a long time coming for T-Mobile, which is the last major U.S. carrier to land Apple’s iPhone. It’s too early to say whether getting the iPhone will help T-Mobile rise from its fourth-place spot, but the addition does finally put T-Mobile on an equal playing field with its competition. And that’s good enough for the moment.