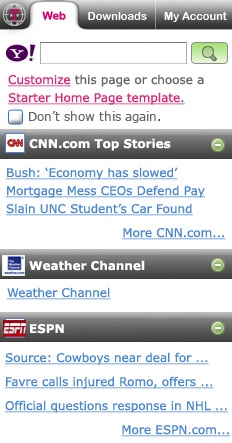 T-Mobile USA is rolling out a new mobile web browsing experience  called web2go. By allowing users to browse the “true” internet and opening a store for third-party applications, web2go brings elements of the smartphone experience found on T-Mobile’s own G1 (powered by Google’s Android Operating System) and Apple’s iPhone to a much broader range of devices.

Previously, T-Mobile users could only access mobile-specific content like ringtones and a limited number of mobile-designed web sites. Now however, web2go allows them to visit “virtually” any website, and to search the web using Yahoo oneSearch. (A company called Medio, which has powered T-Mobile search features in the past, will integrate their search results of mobile content with Yahoo’s.)

Ian McKerlich, T-Mobile USA’s director of mobile web and content, acknowledges that not all T-Mobile phones will be powerful enough to visit every web page or run every application. But for owners of higher-end phones, this should assuage some jealousy of your iPhone-owning friends. T-Mobile will also simplify its data plans to encourage mobile web browsing, McKerlich says.

Perhaps the most interesting part of the announcement is the web2go application store, where members of the devPartner Community can sell their apps. The store moves away from the traditional model for deals between operators and applications, and towards the iPhone app store model. But T-Mobile’s marketplace will be more transparent than Apple’s, McKerlich says. While there have been complaints that Apple rejects applications in an arbitrary manner, he says T-Mobile offers a very clear list of requirements. Broadly speaking, those requirements include treating customer information appropriately, avoiding negative effects on other applications and avoiding anything illegal. If you meet those requirements, you’re in, he says.

McKerlich won’t give me specific numbers for the devPartner program, only saying that T-Mobile is happy with the response. Some apps will be available immediately, while many more will roll out in the next week or so.

Of course, I had to wonder how this fits in with the G1 — Android, after all, has its own marketplace, which is growing fast. McKerlich says the Android and T-Mobile efforts are complementary.