If you’ve followed my prior coverage of early 5G networks and devices, you know that I’ve worked hard to provide a fair perspective on the transformative new wireless technology: Beyond reporting the news, my opinion pieces have praised companies for taking real steps forward with 5G, while offering measured concern or criticism whenever it’s been warranted. I’ve also spent a lot of time testing live 5G devices and networks, talking with 5G engineers and executives, and visiting trade shows to stay ahead of the latest 5G developments.

So when I say that I’m somewhat concerned about T-Mobile’s impending launch of a potentially slow 600MHz 5G network, that concern isn’t coming from a place of ignorance, or a desire to stir the pot just to be dramatic. As a current T-Mobile 4G customer, I’d like to know what speeds I can expect from T-Mobile 5G, but the carrier is barely saying anything — even though it just announced its third 5G phone, and simultaneously said that it’s accelerating its 600MHz 5G rollout to reach 200 million people in the United States this year.

Some background: I’ve been asking T-Mobile for nearly a year to quantify the expected performance of its promised nationwide blanket of low-band 5G coverage, and reached out again for current numbers as recently as this morning, with no response. As of right now, the carrier’s website offers only two numbers, both of which are vague and prospective. By 2024, it says, the “5G network will be significantly faster than our 4G LTE is today” — 15x faster speeds. On the same page, without providing a date or other details, it says that “5G speed will be up to 10x faster, compared to LTE.”

If you want hard numbers, you need to follow comments made by T-Mobile CTO Neville Ray during quarterly calls with financial analysts. Back in February, Ray told analysts that its 600MHz 5G “speeds are going to be on top of LTE,” without providing further quantification. In the next call, Ray suggested that 600MHz 5G would “move from the 30-35 [Mbps] averages that exist in the network today into the 60s and 70s,” with peaks “probably not quite doubling where we are today, but into the hundreds of megabits per second” — assuming the device can aggregate the carrier’s low-band spectrum with some of its mid-band spectrum. 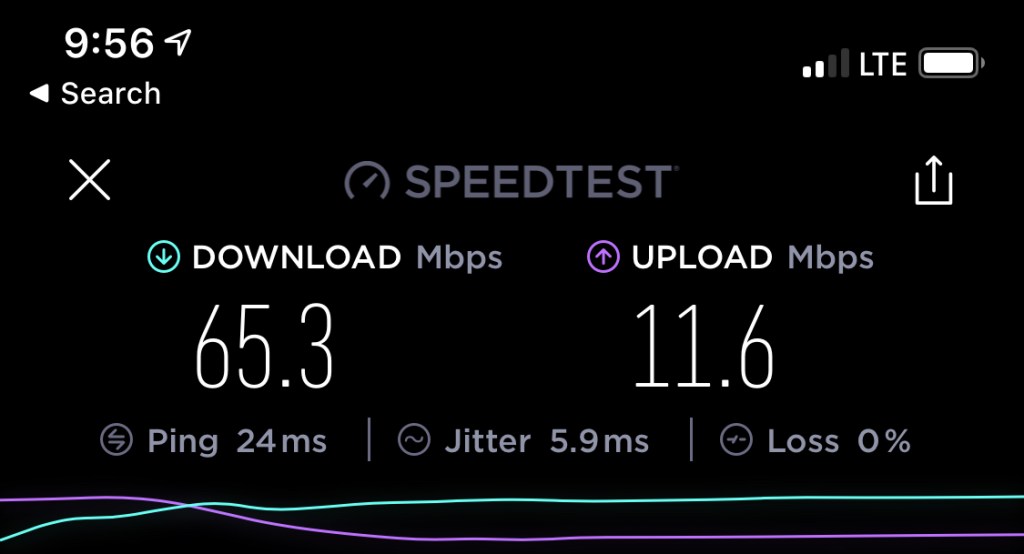 It’s important to understand that T-Mobile hasn’t been publicizing these estimates to consumers or journalists. I’ve hoped that’s because the numbers were subject to change (and improve) as the launch gets closer. But it could be because the “5G” numbers are terrible — averages at the same speed my T-Mobile iPhone 11 Pro hit this morning at my home with two bars of signal, with peaks near speeds I saw with a 4G iPhone XS during testing last year.

Meanwhile, Sprint has quantified its mid-band 5G performance, promising 203.8Mbps downloads on average, with higher numbers in the 600Mbps range at peak. Just like Verizon’s figures, users of early Sprint 5G devices have been able to confirm those estimates with real-world testing, and I’ve personally seen similar numbers, using a OnePlus 7 Pro 5G to hit nearly 500Mbps peaks while hovering largely in the sub-200Mbps range in 5G areas.

The Un-carrier’s 5G approach has been comparatively challenging to cover. It pushed back its plan to launch 600MHz 5G earlier this year due to a lack of compatible hardware, instead rolling out millimeter wave 5G in six cities at the very end of June. This was somewhat surprising, as T-Mobile had only months earlier used its CES booth to trash millimeter wave signal performance, touting the superior distances and window-penetrating abilities of 600MHz radio signals.

Granted, T-Mobile has maintained for some time that its 5G rollout would include three separate layers of coverage: the low-band 600MHz 5G blanket across all of America, mid-band 2.5GHZ (Sprint) 5G in cities and towns, plus high-band millimeter wave 5G in super-dense urban and public gathering locations. But while it boldly committed to being the “first” to deliver a “nationwide 5G network,” it hasn’t been so bold in explaining what its nationwide 5G will actually feel like for consumers.

By T-Mobile’s own yardstick, “mildly faster 4G” isn’t a good answer. The company excoriated rival AT&T for rebranding its late-stage 4G technology as “5G Evolution,” signaling when its network was delivering up to twice the speed of typical AT&T 4G. Independent testing found AT&T’s “5GE” speeds were nearly 60% faster than non-5GE connections, but still lagged behind 4G performance on T-Mobile’s and Verizon’s existing networks.

Now it’s possible that T-Mobile’s nationwide 5G will be in the same general ballpark as 5GE — in other words, all but indistinguishable from good 4G. Part of that would be due to recent cell tower upgrades to improve carriers’ 4G and 5G performance, but the other part is the limited amount of 600MHz spectrum T-Mobile is dedicating to 5G service. Beyond download speeds, there also hasn’t been any quantification of the latency users will see with 600MHz towers located at great distances from their devices.

Weak 600MHz 5G performance could disappoint a lot of people, particularly customers who saw T-Mobile’s website assurance of “up to 10x faster” speeds compared to LTE. A close reading of T-Mobile’s announcements of the OnePlus 7T Pro 5G and Samsung Galaxy Note10+ 5G raises another issue: Neither of these devices will support T-Mobile’s millimeter wave 5G network. Instead, they’ll only access 5G through T-Mobile’s 600MHz spectrum, which means that 10x performance leap over 4G would be essentially impossible to achieve.

I’m personally hoping that T-Mobile will have some updated and better numbers to share on 600MHz 5G network performance before it flips the switch to activate the service later this year. If not, its “5G For All” campaign won’t be much better than 4G For All, and the Un-carrier will soon be facing the same sorts of criticism it leveled at AT&T.