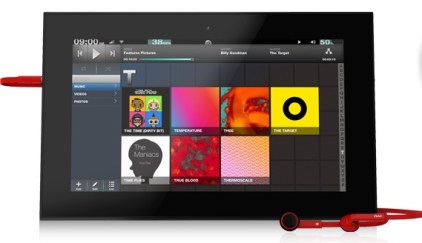 Fusion Garage CEO Chandrasekar “Chandra” Rathakrishnan unveiled the company’s new operating system today, GridOS, in a live webcast, along with its Grid 10 tablet and Grid 4 smartphone. Rathakrishnan explained that the company decided to pursue a mock marketing campaign as TabCo because he didn’t think people would give its new devices a fair shake otherwise.

Speaking about the Joojoo tablet, he said, “Our initial hype didn’t meet the performance of the product.” The company obviously wants to be taken more seriously with its Grid devices, but I don’t really think the TabCo hype helped its case much. And of course, many still remember Fusion Garage as the company that co-developed, and ultimately betrayed, TechCrunch founder Michael Arrington’s Crunchpad tablet.

The company said its GridOS and devices are an answer to countless Android devices that all look the same. The GridOS is based on the Android kernel, and it can run Android apps, but Fusion Garage has developed an entirely new grid layout that makes it look completely different than Android. I’ll admit that the interface looks cool, but it’s certainly not as groundbreaking as the company’s marketing would have you believe.

GridOS devices will be able to run apps from Amazon’s Android app store, and Fusion Garage will also launch its own Grid Shop for apps specific to the platform. Given how little the operating system resembles Android, don’t expect to see the official Android Market on GridOS.

The Grid 10 tablet sports a 10-inch screen, a dual-core Nvidia Tegra 2 processor, and a (surprisingly high) 1366 by 769 resolution. It’ll cost $499 for the Wi-Fi only version, and $599 for built-in 3G. The company is taking pre-orders for the device now on its website and at Amazon. The tablet is expected to ship on September 15.

The company offered up fewer details on its Grid 4 smartphone, but Chandrasekar did show off how you can continue watching media on it from the Grid 10. The phone will featured a four-inch screen, dual-core Qualcomm processor and will sell for $399 unlocked. It’s expected to ship in the fourth quarter, and the company will announce carriers at that point as well.