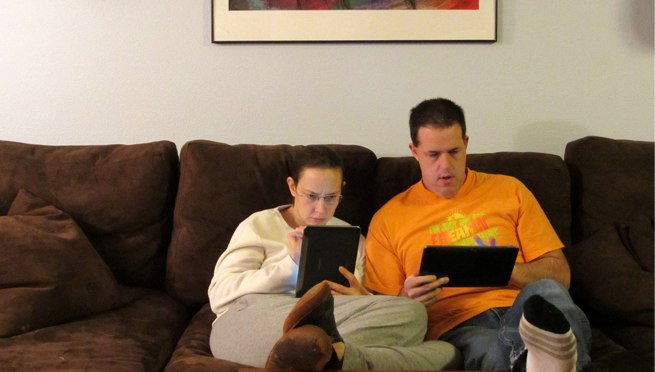 New research from analytics firm Nielsen confirms what most have suspected about the symbiotic relationship between tablets and television, and offers some hope for a growing crop of startups looking to capitalize on the second screen experience.

In a 2011 fourth quarter survey of connected device owners, Nielsen found that 88 percent of tablet owners in the U.S. use their device while watching TV at least once a month, 45 percent do so on a daily basis, and more than a quarter (26 percent) go into multitask boob-tube mode several times a day. 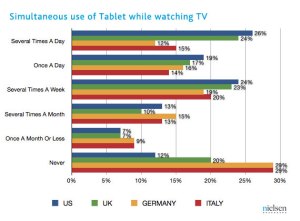 The trend of tablets taking over the living room crosses borders too. Eighty percent of U.K. device owners indicated that they touched their way to entertainment heaven while watching TV at least once in a month.

Tablet usage in conjunction with television-watching trumps that of smartphone usage, according to Nielsen’s data, though not by much. In the U.S., 86 percent of smartphone owners said they used their device while watching TV at least once during a 30-day period. In the U.K, 78 percent of the smartphone-owning population said they were simultaneous consumers.

Multitaskers are, by and large, checking email (how boring), but Nielsen found one other popular activity that has important implications for apps such as GetGlue, Miso, and IntoNow focused on enhancing this extended, second screen experience.

“Device owners also seem to engage with content related to the TV as well, either by looking up information related to the show or looking for deals and general information on products advertised on TV,” Nielsen said in its report.

That last nugget could point to a movement in the making where mobile users embrace social television applications, a class heretofore relegated to the edges of social media land, for extra content. The findings also suggest that when consumers have a smartphone or tablet handy, they’re interested in learning more from advertisers, a clear opportunity for marketers and Shazam as it pushes ahead with its ad-tagging initiatives.