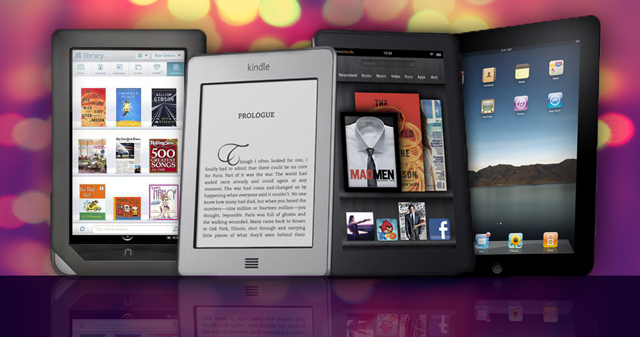 Between Kindlemania and the usual gift-giving glut of gadgets, the number of e-reader- and tablet-owning U.S. consumers doubled between mid-December 2011 and early January 2012.

According to research just published by the Pew Internet & American Life Project, 29 percent of adults own at least one tablet or e-reader. Over the winter holidays, ownership numbers rose for both device types from 10 percent to 19 percent.

The Pew project conducted three surveys, one in mid-December and two at the beginning of 2012. The results show a marked increase in ownership of tablets, e-readers, and the hybrids that exist somewhere between those two categories.

It’s hardly surprising; if you’ve been following the tablet market, you’ve probably noticed more than a few competitively priced entrants, such as the Kindle Fire and Nook Color, both of which made their debut in 2011.

With a slew of color, touchscreen, app-running devices — whether they are called tablets or e-readers by their manufacturers — all priced between $100 and $250, tablet ownership is now no longer solely in the domain of those with plenty of cash to burn. 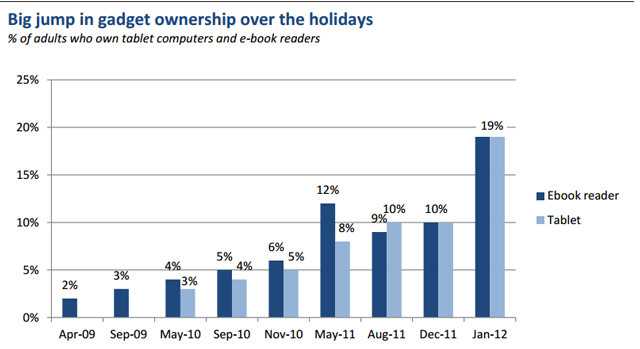 Leading the pack is Amazon, which sells a slate of Kindle e-readers and tablets. The online retail giant claimed to have sold units in its Kindle lineup at a rate of one million e-readers per week during the holiday push.

“Kindle Fire is the most successful product we’ve ever launched -– it’s the bestselling product across all of Amazon for 11 straight weeks, we’ve already sold millions of units, and we’re building millions more to meet the high demand,” said Dave Limp, Amazon’s Kindle-focused vice president, in the middle of December.

These somewhat down-market (if only in the graphics department) tablet/e-reader hybrids became so popular over the past few months that some analysts saw iPad sales slip as a direct result.

“These are customers that either would have purchased a $100 Kindle or no tablet at all,” said Morgan Keegan analyst Tavis McCourt at the beginning of January. “There are some customers who clearly wanted to gift a tablet this year, and it’s cheaper to gift a Fire than and iPad. That’s where the impact comes in.”

However, money still plays some role in whether or not a given consumer decides to spring for a tablet.

While some demographic factors such as race and gender showed little or no statistically significant variations among tablet owners, education and correlating factors such as income showed strong proportional relationships to tablet and e-reader ownership.

Based on Pew’s data, here are some tables we made to show income and education’s effects on tablet and e-reader purchases: 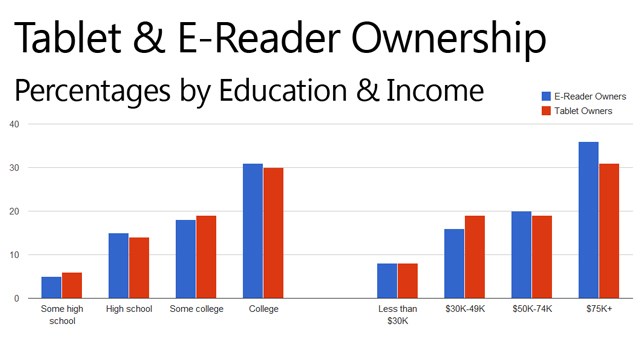 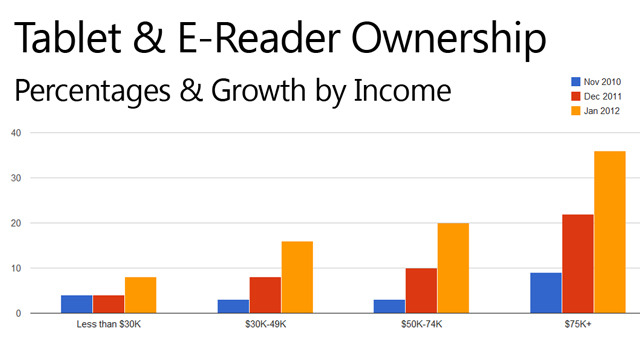 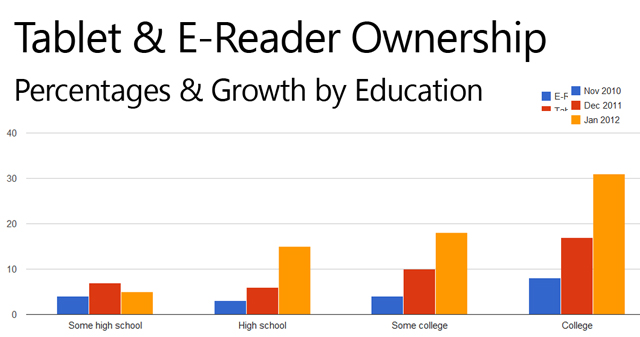