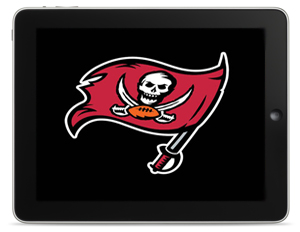 If being a professional football player wasn’t already a sweet enough deal, imagine being told by your coach that you’re getting a free iPad. Tampa Bay Buccaneers coach Raheem Morris has issued his entire team iPad 2 tablets to replace printed playbooks and to allow players to re-watch game videos, reports the St. Petersburg Times.

The move to go paperless by replacing printed tomes with tablets is becoming a trend at companies and organizations. Two days ago, United Airlines announced it was purchasing 11,000 iPads to supplant massive flight manuals and give pilots access to digital flight tools.

Tampa Bay has told its 90 players to bring the iPads to practices and games instead of playbooks, which are the size of the “Yellow Pages.” Players can use the devices at home to review important practice, situational and game footage from anywhere they choose, rather than a team room with a projector or their personal TVs.

“It’s crazy how much technology has changed the game,” second-year safety Cody Grimm told the St. Petersburg Times. “Back in the day, I think probably the whole team had to sit down with a projector and a reel, and watch the film together. They’d have the whole offense in the same meeting room. Now we all have our own iPad.”

Using a tablet instead of a paper playbook also gives the team a better sense of security in case it is lost. Players can lock the devices with a passcode, and if an iPad is ever stolen, the device can be remotely wiped using the Find my iPhone application.