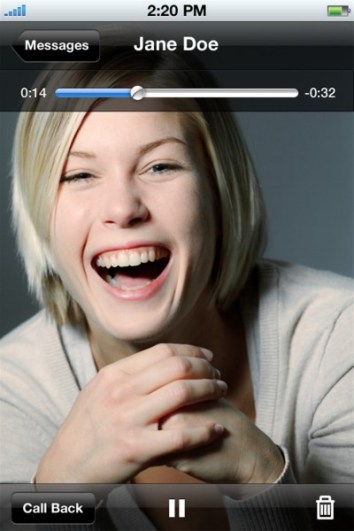 Video chat startup Tango just can’t stop innovating. After recently launching the first Windows Phone video chat app, Tango is now gearing up to offer video messages, making it one of the first such services to offer a video equivalent to voicemail.

There’s a potentially huge use for video messaging beyond mere video voicemail, and Tango — with 30 million users after launching only a year ago — is in a good position to create the video messaging equivalent of Twitter or Tumblr.

“We want to see if we can become the place where people can keep important visual moments,”  CTO and co-founder Eric Setton told VentureBeat in an interview yesterday.

While Skype, Apple’s Facetime and Google+ hangouts all offer popular video chat services, none of them include video voicemail. (Update: Qik, which is owned by Skype, does offer video voicemails.) The company’s insane two-week development cycle helps too, forming the heart of the company’s growth and ability to quickly add new features.

The company is also announcing Tango Surprises, a collection of fun animations that can spice up video calls. Both features will be available in upcoming versions of Tango’s free iOS and Android apps. (The company planned to have the iOS app available today, but Apple’s review process forced the release to Tuesday.) They’re the first steps towards monetization for Tango, which has until now offered its cross-platform video chat completely free.

The video messages feature was something Tango has wanted to do for a while, and it’s particularly useful because people aren’t always available for video chats, which has likely been a hindrance to services like Tango and Apple’s FaceTime.

Video messaging works just as you’d expect: If a friend doesn’t pick up when you try to make a Tango video call, you’re presented with the option of leaving a video message. After recording the message (limited to 30 seconds at the moment), you just hit a button to finalize the process and your friend will instantly get an alert on their device.

You can record messages over 3G or Wi-Fi, and since Tango is recording the video directly on its servers, you won’t have to wait forever to get the video upload. If you have enough bandwidth to start a Tango video message, it’ll be sent to your friends as soon as you complete the call.

Just like with Tango’s video calls, the messages can be sent between users on iOS and Android. Windows Phone and Windows PC users can’t record messages just yet, but you’ll still be able to play back messages on those platforms. Tango’s Android app also has the ability to only send a video message (by holding your finger down on a contact’s name), something that isn’t yet supported on the iOS side.

Setton tells me that the company had to adopt a hybrid cloud model for its infrastructure, allowing it to add on additional cloud storage and computing resources to its existing hardware. The company has previously only relied on cloud services (Amazon’s, in particular) for testing purposes, but it needed to do so more heavily to launch such a potentially demanding feature.

Less revolutionary, but still fun, is Tango’s new Surprises feature, which gives users animations to include in video calls like cute hearts, a monkey, and a ninja. The company first tried its hand at in-call animations last Valentines Day, when it offered the ability for users to send hearts to each other. 35 percent of calls made last Valentines Day used the feature, which told the company that users were clearly interested in similar fun additions.

Right now Tango Surprises looks like a whimsical implementation of augmented reality, a term used to describe computer graphics over a real-world video feed. If popular, the feature could become even more advanced with the addition of facial tracking and branded products, Setton said.

Tango has come up with simplified pricing for both features. You’ll have access to your five most recent video messages for free, but you’ll have to spend an additional 99 cents for five more messages, or $1.98 for 10 more. As for Tango Surprises, every Tango user will receive one random animation for free, and you can buy the entire set of animations for an additional $1.99.

Tango now has 90 employees, with most in its Palo Alto, California offices. The company also has around a dozen employees in China, who can keep working when their Palo Alto brethren are asleep.

So far, Tango has raised a total of $47 million in two rounds of funding.