LAS VEGAS — The Consumer Electronics Show is a logistical nightmare. Even for a veteran like me (who gave advice on how to survive the show), things inevitably fall apart. Murphy’s Law kicks in. Even as I was tweeting about how much fun it was and all of the important people I was seeing, I was barely surviving.

Almost from the start, I either suffered or witnessed technical and human failures at the at the show this week. I would argue that these failures are more common than we would like to admit, and they tell us a lot about the failings of technology and how far it has to go before it really gives us relief.

As I arrived at CES on Sunday, both opening presenters had to wait for their slides to be correctly displayed on the screen before they could proceed.

“Sorry folks, technology is wonderful,” said Steve Koenig, director of industry analysis at the Consumer Electronics Association, as a few hundred journalists waited for him. 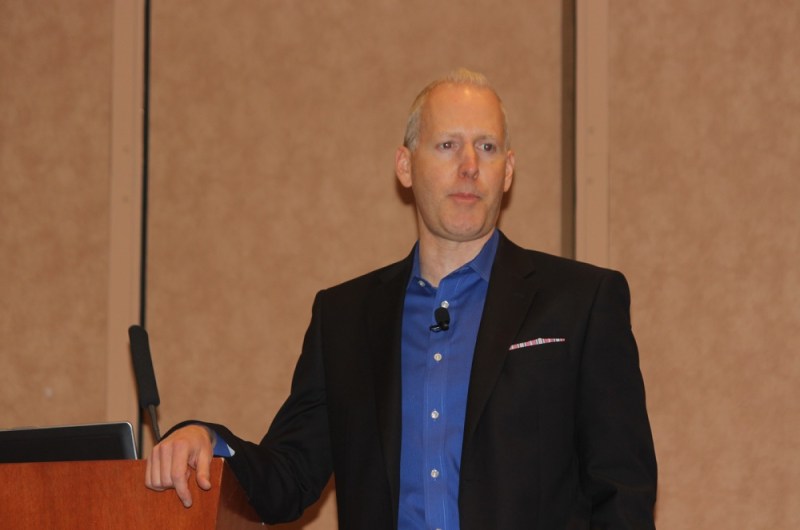 Above: Steve Koenig of the CEA waits for his slides.

I felt bad for Koenig, but it was a fitting beginning for CES, a trade show about how technology is supposed to improve our lives. But this show covered 2 million square feet of exhibits, and it probably drew more than 150,000 people to the sprawling Las Vegas Convention Center and the Sands Expo.

My own troubles covering the show, even as a veteran of 18 previous CES shows, say a lot about the perils of depending on technology. We’re all counting on this “Internet of things” to make our lives better, but what’s going to happen when all of those things run out of batteries at the same time?

Before CES, I warned other people to take a lot of vitamins and use hand sanitizer. But I arrived at the show sick. I hoped I would slog through it and get better. And, for the most part, that strategy worked. I saw a lot of other people who were sick, and I figure we made everybody else there sick too. That’s just the sort of thing that can ruin all the fun, and there was a lot of it going around.

One of the first things I wanted to do was count my steps at the show. I could brag that I had walked 30,000 steps in a day. But the Intel Basis Peak smartwatch I was using failed before the show. I couldn’t get it to work again, let alone pair via Bluetooth with my iPhone 5S. I didn’t get anything to replace it, and it felt like the data I could have generated was forever lost. I still believe the Basis Peak is one of the best wearable devices on the market, but making it work isn’t the seamless experience it should be yet. Intel assures me that my bad experience is an anomaly. But I’ll find out more about that and report my results later. 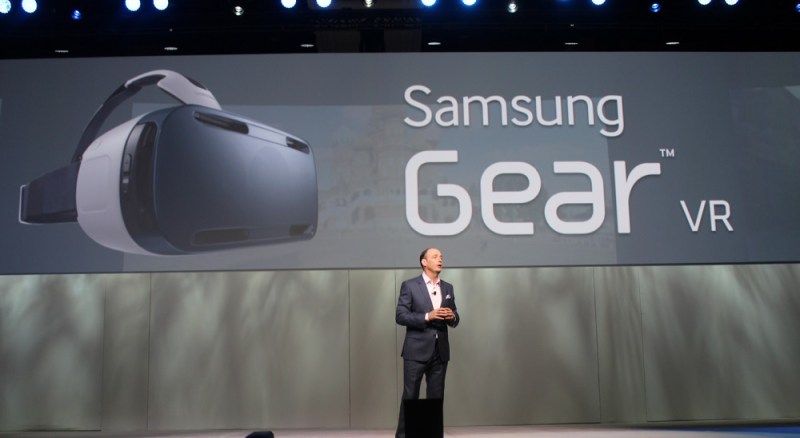 My colleagues and I were also excited to be covering press day, which takes place on Monday, before the exhibit floor opens. But during one of the biggest events — Samsung’s press conference on Monday afternoon — we couldn’t get Wi-Fi access. We also couldn’t get any wireless reception on our MiFi hotspots. One of our writers filed a story while watching the livestream, but the video was choppy. When you put that many members of the press together all at once to cover an urgent event, the infrastructure just collapses. It was like when I went to an Elton John concert this year and couldn’t upload any selfies because everyone else was doing the same thing. All I could do was tweet from my phone.

Such experiences are a modern-day curse, much like the traffic jams outside the convention center as the show crowd disperses. My pictures were kind of hazy. Even though I had a decent camera, I was too far away. And in the dark rooms, the photos didn’t come out great.

I’ve ranted before about batteries. I hate batteries, especially charging them. And once again, my life revolved around a battery failure. I had fully charged my Canon Rebel XSi battery before the show, but I shot so many pictures that I drained the battery. While I was shooting my second take of an interview with Jessica Chobot, the battery gave out. I had a half hour before my next appointment, so I ran back to the Riviera hotel to fetch the battery charger that I should have put in my backpack. I had to catch a cab back to make my next interview. That was my own epic fail, but I still blame the battery makers for failing to deliver a battery that lasts longer. I left the battery charging in the press room, and forgot it there. Fortunately, the next morning, it was still there.

I wasn’t the only one having problems. When the tables are turned, I usually smile. Intel chief executive Brian Krzanich was doing a demo in his keynote speech. A camera was supposed to detect an approaching woman and her smartphone, and then authenticate her through face recognition. Once authenticated, it would open the door. It did so, but the door didn’t open. Krzanich walked over to open the door, and then it finally opened just before he got there. On stage, demos almost always go bad. 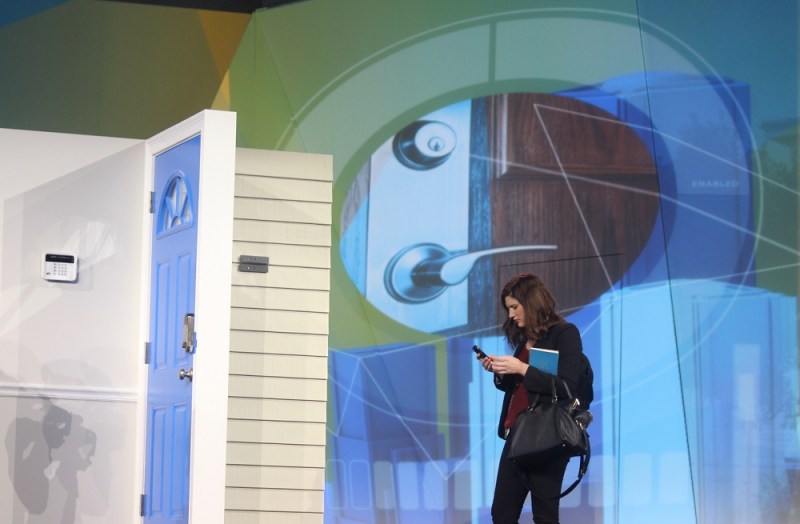 And while I smiled at Krzanich’s discomfort, I ran into more of my own. As the crowd of 5,000 exited the Venetian hotel’s big ballroom, I went to the parking garage. It was rush hour, and there was a traffic jam. In 20 minutes, I went from the ninth floor of the parking garage to the eighth floor. So I re-parked and walked two hotels away to the Wynn. It was a maze, as casinos are allegedly designed to help you get lost and gamble rather than find your way out. I had to ask for directions twice to get over to the next party. I had no indoor navigation to help me.

We don’t brag about those private moments when we screw up. I could see a ton of collisions at this year’s show. People with smartphones were continuously looking down at their screens instead of watching where they were going. So not only did they trip on my roller bag, they also ran right into me. I fear this is the future of the human condition, where ships will pass each other in the night, as in a deep fog, and they never even know that they’ve passed each other. Texting while walking. It should be illegal.

Despite those smartphones with their calendar apps, I had plenty of no-shows for my interviews this year. I had to reschedule those interviews, and that, in turn, screwed up my ability to make other interviews. It was kind of a cascading effect, and by Thursday, everything was messed up. I missed appointments. At least I didn’t schedule any appointments before the show floor opens, a rookie mistake for newcomers. Sometimes companies will promise me one interviewee, and then, when I show up, I get another, less important interviewee instead. It happens. But I wish I could send a different me to those appointments. Or maybe I could just send an aerial drone ahead of me to make sure I’m going to get the right person before I walk a couple of miles to get there. All I can say is that I need some serious, real-time smart calendar support that really helps me deal with complicated logistics. And so far, I haven’t found it.

You’ll notice that my pattern is to make a mistake and then blame somebody else for not preventing it in the first place. I’m not going to mention my rental car problem, which I will also blame on someone else.

Sometimes, there isn’t much we can do. The creators of Sulon Technologies’ Cortex virtual reality system were excited to show off their gear for the first time. But as soon as the show opened, everybody turned on their devices and a ton of radio interference started. Three of the four Cortex demos wouldn’t work anymore, and the team had to scramble to fix it.

I am proud that I didn’t lose anything important on this trip, like my wallet, my keys, my iPhone, my digital recorder, my MiFi, or my laptop. All of these things are critical for me. Wistiki, a French startup in the Eureka Park exhibit area of the show, had a nice solution with a sensor that you can paste or attach to your devices. If you lose them, you can make the Wistiki ring from your smartphone or tablet, or find its global positioning system (GPS) coordinates.

I figure that if I have any tiny fitness tracker that isn’t attached to my body, I’ll lose it. And somebody will make a killing as a result, just like those folks at the mall who replace cracked iPhone screens for $105.

Things could have been worse. One CEO told me he got mugged in the middle of a big casino. Some guy cracked him in the mouth with fist. The CEO didn’t fall and yelled back, and the guy went running off. The surveillance cameras could have captured the guy’s image, but the police didn’t appear motivated to do much. There were more urgent things happening, and the CEO didn’t even get robbed. He just had a big fat lip.

Yes, that’s terrible. I count myself lucky. And I’m happy to be back at home. But I’m a little more sober about what I want from technology. I want it to prevent these logistical nightmares and make up for my own lack of brain cells. I want technology designers to think about how to deal with situations that are going wrong, not situations where the conditions are pristine. 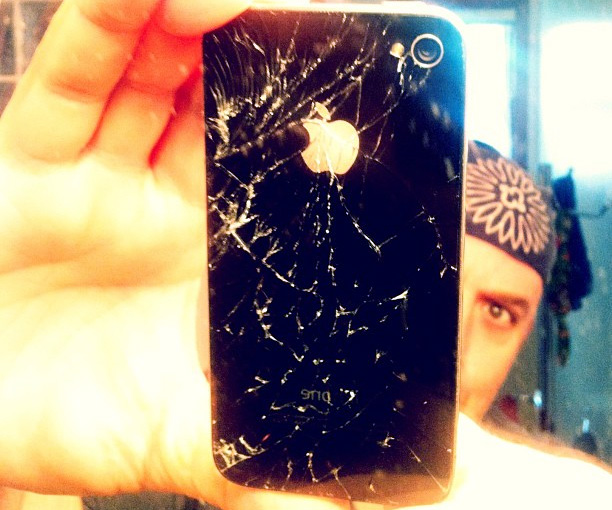 Above: A cracked iPhone