Telegram has announced a handful of updates today, as the mobile messaging company doubles down on its group-chat efforts.

First up, Telegram is pushing the upper limit of groups from 1,000 to 5,000 participants — this comes just four months after the company increased the limit from 200 to make way for the thousand-strong “supergroups.” Once your group reaches 200 members you can now elect to upgrade to supergroup status, which optimizes settings for larger communities. New members will be able to see the whole message history when they join, for example, and when someone deletes a message, it will be deleted for everyone in the group. Also, because supergroups can be rather sizeable, notifications are muted by default to prevent your phone from buzzing itself into oblivion. 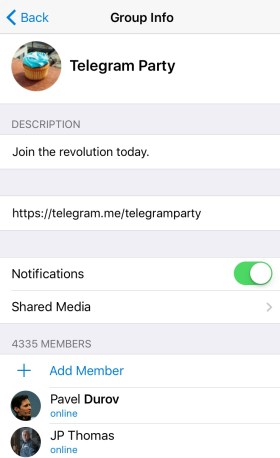 In addition to larger groups, Telegram now lets users push supergroups to the public using a shareable short link, meaning anybody can view the group’s conversation history — though they’ll need to join before they can post messages. Group admins will also be given extra controls to thwart spammers, including blocking and reporting tools. Public groups are already live in Europe and the U.S., and will be rolling out gradually to other countries, though, interestingly, Telegram said that “several countries in Asia” don’t yet have the feature due to a history of “significant spam activity.”

Elsewhere, Supergroup admins can also now pin important news to the top of a chat, meaning everyone who joins for the first time or opens the app after some time away will see the message. This is similar to features in other messaging apps and social networks — Twitter, for instance, lets you pin a tweet to the top of your timeline.

Founded in 2013 by Pavel Durov (creator of Russian social networking giant VK) and his brother Nikolai, Telegram has emerged as a major player in the increasingly competitive chat app realm. This is in part due to the company’s focus on encryption and privacy; the app also offers a secret chat feature that makes it easy to delete messages or schedule a time for them to self-destruct.

A few weeks back, Telegram announced it had passed 100 million monthly active users (MAUs), which represents a 60 percent rise in just nine months. It has a considerable ways to go to catch up with its competition — Facebook Messenger and WhatsApp claim almost two billion MAUs between them, but it’s still a sizable number of users. And by focusing on building not only the size of the groups but also their visibility, the company’s hoping it can maintain its recent growth spurt.