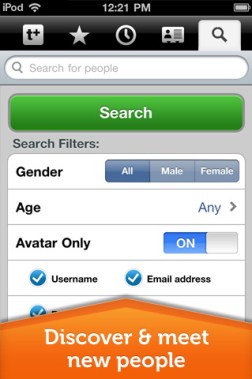 TextPlus, an application that lets groups easily text each other for free, today announced it has submitted its 4.4 version to Apple. The new version will allow users not only to text for free but also to search for people (see image),  bringing a new social aspect to group texting. We’ll be sure to let you know when the new version gets approved.

A deeper dive into numbers shows that during 2009, TextPlus users sent 713 million messages and had a total of 8.7 million users. As we close in on the end of 2010, the company claims users have sent 5 billion messages (2 billion in Q4 alone) and has close to 32 million total users. The overall number includes apps downloaded on a smartphone as well as users sending texts through simple non-smartphone phones.

Several companies are providing group texting services, including CallVine and TextFree. However, TextPlus appears to be the first to add several social features, including user profiles and search.

The Marina Del Ray, Calif. based company, founded in 2007, has raised a total of $13.2 million in funding. Kleiner Perkins Caufield & Byers participated in both rounds.