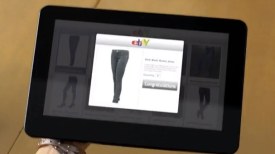 Thanksgiving Day 2011 will go down as a day when many of you opted to indulge in more than just an extra helping of turkey. A growing number of shoppers opened up their mobile wallets for online deals too good to pass up.

The U.S. holiday saw a 511 percent jump in global mobile payment volume from Thanksgiving 2010, with a majority of folks in the U.S. shopping via mobile between 6:00 and 7:00 p.m. PST, payments platform Paypal announced Friday.

A much larger pool of mobile shoppers contributed to the gigantic leap in payment volume. According to PayPal, an eBay-owned company, there was a 350 percent increase in the number of global customers shopping on mobile this year. Shoppers in New York, Houston, Los Angeles, Miami and Chicago opted to pay via PayPal mobile more than shoppers elsewhere in the world, the company said.

eBay mobile also experienced record Thanksgiving Day activity in the U.S. “The amount shoppers in the U.S. spent via eBay Mobile more than doubled this Thanksgiving over last year,” eBay said in a press statement.

Perhaps, if the day after Thanksgiving is Black Friday, the Thanksgiving Day mobile shopping phenomenon warrants its own name. Couch Potato Thursday, anyone?

But what’s really going on here? The prevalence of smartphones and tablets means that consumers can now shop from the comfort of their couches any time they’d like. And eBay wisely kicked off a massive “When it’s on your mind, it’s on eBay” television ad campaign in September of this year to promote its mobile application as a convenient, whenever-the-mood-strikes-you shopping assistant. Consumers apparently took notice.

The company said Toms shoes, iPhone accessories and a Traxxas brand radio-controlled truck were among the most popular items purchased via eBay mobile in the fashion, electronics and toys categories.

The big bump in mobile shopping underscores the fact that tablets and mobile phones are fast-becoming more common mechanisms for shopping, and further suggests that the emerging mobile pay/wallet industry is on the cusp of a breakout moment.