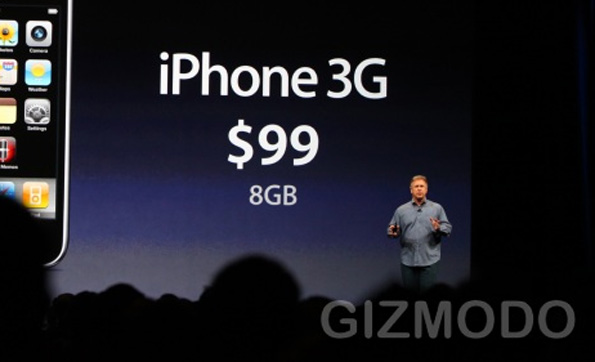 Apple head of marketing Phil Schiller delivered a pleasant, enjoyable keynote show for several thousand software developers this morning at the Moscone West conference center in San Francisco. Newer, better iPhones were the show’s already-predicted climax. But there were three things Schiller didn’t mention onstage that stood out to my fellow Apple loyalists packed into the back row of the press section.

Twitter. Or Facebook. Over the weekend, the New York Times recounted a rumor that Apple was close to acquiring Twitter. The rumor was true enough — Apple had been in the latter stages of an acquisition process. What does it mean that none of Apple’s demos today involved Twitter or Facebook, the hottest two sites on the Internet? It means Apple hasn’t internalized the social networks craze.

Schiller showed how an iPhone can be used to capture family photos and now, videos. (Family vacation albums are a standard Apple demo.) Schiller explained that new iPhone buyers will be able to upload their videos to YouTube. He name-checked MMS, the photo and video-enhanced version of the SMS technology behind cellphone text messages. But Schiller didn’t tweet anything from his phone, nor did he post to Facebook.

I’m sure a thousand Apple apologists will claim this was done to prevent any appearance of bias among the 50,000 apps available for the iPhone, many of which connect to Twitter. Not true at all. Steve Jobs would have zero hesitance to give the iPhone a new Twitter button that would kill a thousand apps. Instead, Apple’s onstage ignorance of social networking shows how slow-moving and out of touch the company can be. It’s easy to find Microsoft shortcomings to mock. It’s harder to recognize your own.

AT&T. People are buying iPhones despite Apple’s exclusive contract with AT&T, not because of it. Buyers of new iPhone 3G S models that arrive in stores and at homes on June 19 won’t immediately be able to send photos or videos to each other. Nor will new iPhone buyers be able to “tether” their phones to a PC or Mac laptop, enabling the laptop to connect to the Net over the phone’s wireless connection to a cellular tower. iPhone owners on two dozen other wireless carriers in nearly 50 other countries have these features. Why don’t Americans have it through AT&T’s exclusive iPhone deal with Apple? Twice, when Schiller mentioned a feature that “requires carrier support,” by which he meant AT&T doesn’t have it yet, the crowd nearly booed.

Steve Jobs. Is he OK, or dying, or what? Many of us hoped Apple’s CEO, an exceptional live stage performer, would make a walk-on appearance. Or at least turn up in a big-screen video chat with Phil. By leaving Jobs entirely out of the keynote, Apple seems to be setting the stage for his successors. I’m sure shareholders are happy to see the company no longer tying its public image to one man. But an Apple event without His Steveness? It just wasn’t the same.