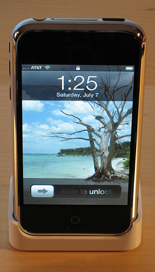 We’re nearing the mark for when the 3G iPhone could become a reality. The device, which is now widely expected to be announced at Apple’s WWDC event on June 9th and launched shortly thereafter, already apparently has people waiting in line in New York — perhaps a month before it’s released. Excitement is high and rumors continue to flow.

While the first iPhone had a huge impact on the mobile market, the 3G version could be even bigger. Many indications are that the device will launch in a significant portion of the world shortly after CEO Steve Jobs unveils it. Armed with 3G technology to enable faster data speeds (as some contend the iPhone should have had from the beginning), the iPhone should become a major player worldwide.

Here’s some of the latest news circulating on the device today:

A senior executive for Telstra, a carrier that will carry the iPhone in Australia, allegedly told Channel News that by the end of 2008 the 3G iPhone will be capable of download speeds of 42 megabits per second. That is faster than almost all broadband Internet connections.

While there has been a lot of talk about Apple including a 3G chipset in the iPhone that is capable of speeds faster than most of what is out there right now, most expect these speeds to top out at 7.2 Mbps, far from the 42 Mbps speed. So unless Apple has some kind of special iPhone with a souped-up 3G chip and network headed for Australia, these claims should be “all but impossible” to achieve.

“There’s not been a product announcement. There hasn’t been any pricing decisions made. That’s yet to come,” AT&T chief financial officer Rick Linder said while speaking at a summit in New York yesterday. So basically he won’t confirm the 3G iPhone, but is saying that a pricing decision on something hasn’t been made yet, but will be shortly.

There’s been a lot of talk that the 3G iPhone could be subsidized by AT&T to bring its price down to $199 if a customer signs a two-year agreement with the mobile service. This talk began with a story last month by Fortune that cited a source familiar with AT&T’s strategy for the new device.

Apple Canada gears up for event of some sort, may contain a letter and a number

A suspicious gathering of Apple Canada staffers is taking place today in Markham, Ontario. The reason? To gear up for a big upcoming event, according to Electronista. We all know that Canada has been chomping at the bit to get the iPhone after watching its Southern neighbor have the device for about a year now. And now we know it’s coming. So it seems unlikely that this big event is for a big summer savings sale.

In his notes to clients, Piper Jaffray’s Gene Munster laid out a few predictions of what to expect on June 9th when Steve Jobs gives his keynote at the WWDC event. Not surprisingly, the first item on his list is the new version of the iPhone with 3G technology. More interesting is his prediction that Apple will use the event to launch a new version of its OS X operating system, one specifically built for the iPhone, dubbed “OS X iPhone.” It sounds like this is basically Apple’s iPhone 2.0 software, but a name change could be in order to show just how integrated the iPhone will be with Apple’s computers.

For what it’s worth, Munster also expects new MacBooks at the event.