Two European fintech startups are teaming up to give a glimpse of what the bank of tomorrow could look like.

Number26, a Peter Thiel-backed German startup that’s setting out to create the bank account of the future, has announced a tie-up with London-based peer-to–peer money-transfer firm TransferWise. The partnership will give Number26 customers in-app access to a cheap international money-transfer service. 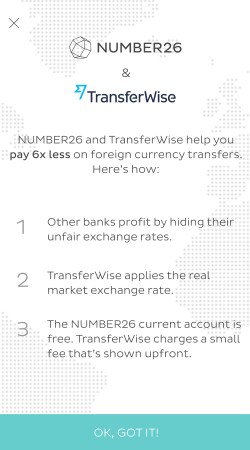 To recap, Number26 was founded out of Berlin in early 2013 as a “mobile-first” bank account, not too dissimilar from BankMobile or Simple in the U.S. Originally only available in Germany and Austria, the service has since expanded across the E.U. into Ireland, Spain, France, Greece, Slovakia, and Italy.

In an interview with VentureBeat at Dublin Web Summit last year, Number26 cofounder Maximilian Tayenthal hinted at the company’s future plans. Indeed, Tayenthal noted the myriad nimble fintech startups that were chipping away at various elements of the traditional bank, including bank accounts and FOREX, and observed that they could band together to “rebundle” an age-old entity that had been systematically “unbundled” with the advent of the Internet.

We’re seeing the first fruits of this vision today. 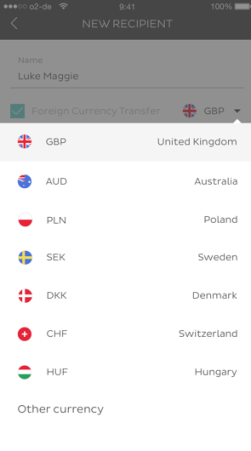 “Our goal is to leverage the best banking products from around the world and make them accessible to customers with one tap, creating a fintech hub inside the Number26 app,” explained cofounder and CEO Valentin Stalf. “And by adding one of the world’s best fintechs in TransferWise as our flagship partner, we can drive banking innovation much faster than traditional banks.”

TransferWise has emerged as a key player in the fintech startup realm with a smart international money transfer service that bypasses the banks to keep costs down. Similar to Number26, TransferWise also counts PayPal-cofounder Peter Thiel as an investor, alongside other big-name backers such as Richard Branson.

“We want to make it as easy and fair as possible for people who need to send money abroad, so we’re very excited that Number26 customers can now access the TransferWise experience without leaving their banking app,” said TransferWise CEO and cofounder Taavet Hinrikus. “This is a great step towards consumers having a wider choice of financial service providers and getting the best service for them.”

Today’s news is a notable step in the evolution of online and mobile banking. Rebundling banking in this way allows startups to focus on their core missions rather than scrambling to provide all types of financial services themselves. There’s no reason other related services couldn’t be thrown into the mix too — perhaps a Robin Hood-style stock investment offering, for example.

A Number26 spokesperson confirmed to VentureBeat that the company does indeed plan to tap other startups and related services through its app this year, including savings, investments, fixed deposits, and maybe even insurance.

What we could end up with is a single app that aggregates the services of multiple fintech startups. The bank of tomorrow is almost here.