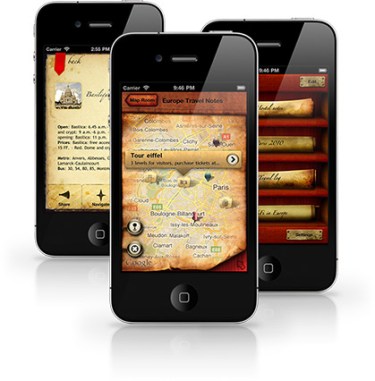 Mobile maps have never looked this good on the iPhone. The Cartographer is a new app ($3.99 on the iTunes Store) that brings support for custom Google Maps, as well as the ability to download maps for use offline, all in a slick vintage user interface.

It’s one of those rare apps that make you sit up and take notice at first, thanks to its unique design and emphasis on usability, but remains consistently useful by delivering features you’ll use often. That’s why we’re choosing the Cartographer as the next innovative app for VentureBeat’s Mobile App Spotlight.

With the app, you can view, edit and create custom Google Maps (Google calls them “My Maps”) right on your phone — a feature that’s been inexplicably missing from Apple’s default Google Maps app. Custom maps are useful because you can do things like mark down points of interest (along with notes) to help guide you during vacation.  Other apps have popped up that give you access to custom Google Maps, but none of them look as good as The Cartographer.

Additionally, you can select map regions and specific zoom levels to download to your device for offline access — enabling you to view maps even when you don’t have network access.

In my testing, the app managed to find all of my custom Google Maps entries with ease, and I found it to be faster than other competing apps. At the moment, the app still launches the iPhone’s Maps app to route directions, but the developers tell me that will eventually be integrated.

The app was developed by A Tasty Pixel, makers of other iPhone apps like Loopy and Talkie. Based in a motorhome traveling across Europe, the developers say that The Cartographer came about because they couldn’t find a suitable app for managing their travel notes. They were inspired by other gorgeous iPhone apps, like Apple’s Books app and Sophiestication’s Groceries app, to move beyond the default app user interface and try for something unique.

Next up for The Cartographer is an iPad version, which A Tasty Pixel’s Michael Tyson considers the perfect platform for the app. Its gorgeous user interface will certainly play well on the iPad’s larger screen. The developers intend to make the iPad version universal, so existing users won’t have to pay for it again. Additionally, they’re considering a stripped-down version of the app to let curious users test it out for free.

Developers: Want to get your app featured like The Cartographer? Then submit your app for consideration!