Since the mid-1990s, entrepreneurs have been trying to tackle the local market. Many have failed. Others, like Yelp and Groupon, have been successful selling services to small businesses, but those services are of dubious value. (Disclosure: I have puts against Yelp and Groupon.)

But mobile is going to bring new life to local. Mobile local offerings — such as restaurant-booking service OpenTable and hotel-deals service HotelTonight — are leveraging real-time information about availability and pricing to create a more efficient market.

When I was in New Orleans, I did a search on Yelp on my computer for restaurants in New Orleans. This should be an easy ad request to fill for a site that has as much restaurant content as Yelp.

I got an ad for On the Border, a mediocre Mexican chain in the spirit of Chili’s. There are two big problems with that. With all of the great restaurants in New Orleans, there’s no way I’d go to On the Border. (Though if forced, I’d choose it over Applebee’s.) The second problem was that this On the Border wasn’t in New Orleans, it was in Baton Rouge, about 80 miles away.

It’s likely that that was an impression-based ad — Yelp got paid just for showing it.  That’s the only way I can justify such an irrelevant ad on a local site.

I tried doing other searches that leverage real-time data. This was in the middle of Jazz Fest, so I expected that most restaurants and hotels would be booked.

One of the services I tried, OpenTable, delivered very practical results — see the screenshot above. 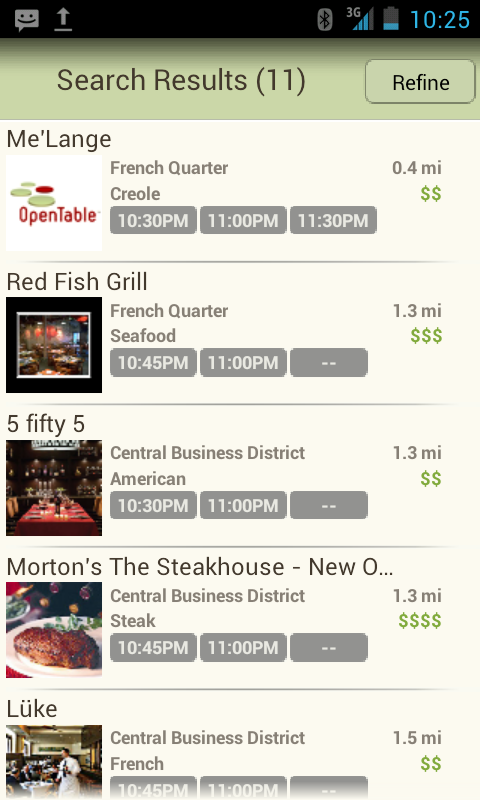 OpenTable showed me plenty of restaurants within a couple of miles. No need to go all the way to Baton Rouge! The real-time information solved another problem: I knew that these restaurants were open and available immediately. This is especially useful late at night or during periods of peak demand. (I ended up at Me’Lange. Their raspberry BBQ pulled pork sandwiches on rosemary cheddar biscuits are to die for. Way better than anything on the menu at On the Border.)

If I had needed a hotel, I could have pulled up HotelTonight. Despite it being one of the busiest weeks in New Orleans, I found hotels with availability: 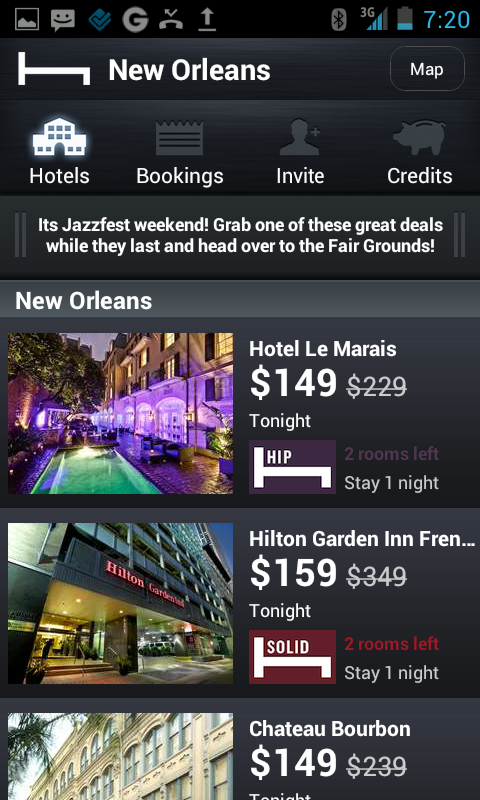 I checked availability throughout Jazz Fest and HotelTonight had some availability each day, though in some cases their rooms sold out as the day went along.

According to OpenTable CEO Matt Roberts, 20% of diners seated on OpenTable come through the service’s mobile apps (including tablets). He expects mobile reservations to become the majority. HotelTonight only works on mobile.

Mobile provides new opportunities for generating business. Potentially, hotels and restaurants could know how many people are in the market for their services right now. If a service like OpenTable sees unusually high demand for restaurants on a given night, it could alert restaurants, which could choose to stay open later to take advantage of the unusual demand.  Because mobile provides a two-way, real time communication mechanism, I can envision that hotels and other providers could reach back with new offers later in the evening. If I check at noon and don’t like the price I see, maybe around 11 p.m. the hotel could ping me again with a last-minute offer.

The rise of mobile also works on the supply side. Tools such as Twitter allow providers like food trucks to provide real-time information to customers. That was one of the first small business uses of Twitter I envisioned when I started using Twitter in 2007. I’ve talked to many small businesses that love using mobile tools because they’re much easier than updating their Web site. Services like Uber and Postmates leverage location information of suppliers to create more efficient services.

Because many of these services get paid for completing a task, there’s also an incentive for the provider to only show relevant results. There’s no point in OpenTable showing me an On the Border 80 miles away because they get paid for bookings. The small screen size of mobile makes this sticking-to-what’s-relevant even more important.

Over time, I expect real-time, performance-based services to crowd out $600 CPM publishing models like Yelp’s.

The real-time availability data can also be turned into performance-based ad units. Each restaurant and hotel availability is a potential ad that could be made available to Twitter, Facebook, and other networks with large mobile audiences. Most importantly, when it comes to small businesses, this can be done without the business having to lift a finger.