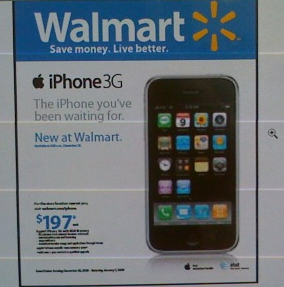 The current hottest iPhone rumor is that it will be available in Wal-Mart stores this month at a discounted price. New information suggests both of those may be true — sort of.

While various blogs have been reporting for weeks that Apple’s hot device would make its way to Wal-Mart in December, several larger mainstream media publications, including The San Jose Mercury News and Bloomberg, have confirmed it. But with those confirmations, the price point at which the iPhone would be sold at Wal-Mart remained a mystery. The San Jose Mercury News got a Wal-Mart employee to confirm a report made by the blog Boy Genius Report, that it would sell a 4 gigaybyte version of the iPhone for $99. But other employees seemed unsure if that was true and were skeptical.

Now, the Wal-Mart training materials and advertising for the iPhone have apparently been leaked online, according to MacRumors. The pictures show an 8GB version of the iPhone being sold for $197 — yes, a whopping $2 below the price it sells for at Apple an AT&T stores. A discount, but not the $100 many were hoping for.

I suppose it is still possible that a 4GB version could show up for $99, but another site, MacBlogz, is reporting that its sources inside AT&T are saying that a 4GB version will not be coming to Wal-Mart or anyone else at this time.

Another issue that remains up in the air is exactly when the iPhone will be available at Wal-Mart. The Mercury News heard it could be right before Christmas, but MacRumors says it will be December 28.

No super-cheap iPhone at Wal-Mart in time for Christmas? Bah-humbug.