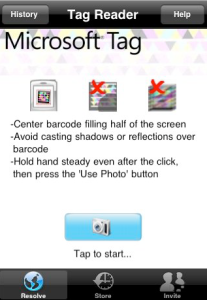 For a company whose chief executive laughed off the iPhone when it was first announced, Microsoft is sure making a lot of iPhone applications. The company unveiled another app, Tag Reader [iTunes], at CES today, marking the second time it’s released an app to Apple’s App Store in the past month.

Just like Seadragon Mobile, its first iPhone app, Tag Reader is more of a demonstration app than anything useful — for now. You see, the point of the app is to be able to read Microsoft Tags, a new barcode-like technology developed by Microsoft Research. If you know what QR Codes are, square barcodes that a mobile phone can scan to get coupons or other promotions, this is similar except that Microsoft is calling its tag technology High Capacity Color Barcodes (HCCBs).

But there are some differences between HCCBs and QR Codes. HCCBs are smaller, they’re in color and they don’t actually store any information except for an ID to grab information from Microsoft’s servers when you scan one, as the Microsoft blog istartedsomething points out.

The idea is to connect you with information that resides somewhere else without having you type in a long URL. Microsoft hopes these will take off in traditional marketing media — print advertising, billboards, packaging and merchandising, as it notes on the app’s page in the App Store. Because these codes link to information stored elsewhere, publishers will be able to gather analytical data about how the codes are being used.

But individuals can also make their own tags to create links to their own information on the web. This could be useful for putting on a business card.

It’s a neat concept, but just as with QR Codes, Microsoft Tags will have to take off for them to be useful. I have the iPhone app installed right now but I can’t do anything with it because I have yet to come across one of these codes. Google has been working with QR Codes for a while, but while they are popular in places like Japan, they haven’t yet taken off in the U.S.

Microsoft Tags aren’t confined to working on the iPhone, the company has readers for Windows Mobile, J2ME, BlackBerry and Symbian S60 phones, as TechCrunch points out. Tag Reader is available for free in the App Store.