We tried as hard as we could to cover the 2.2 million square feet of exhibit space at the 2015 International CES, the big tech trade show that drew 170,000 people to Las Vegas last week. I came home with a cough and a toe blister as proof that I tried. But now that I’m back at home, I’m absorbing what I saw as the biggest tech trends.

I figure I walked 30 miles during the show, though I lost my step counter due to epic tech fail. I was glad that I only saw one pair of 3D glasses the whole time I was there, and that all of that excitement about phablets had given way to conversations about wearables.

You can find all of our CES 2015 coverage here. And for historical perspective, here’s our trends story from CES 2014. We always find there are dominant topics for conversation, like 4K TVs and the Internet of Things. But there are also subthemes that run counter to the main ones.

1. The Internet of Things is real, but expensive 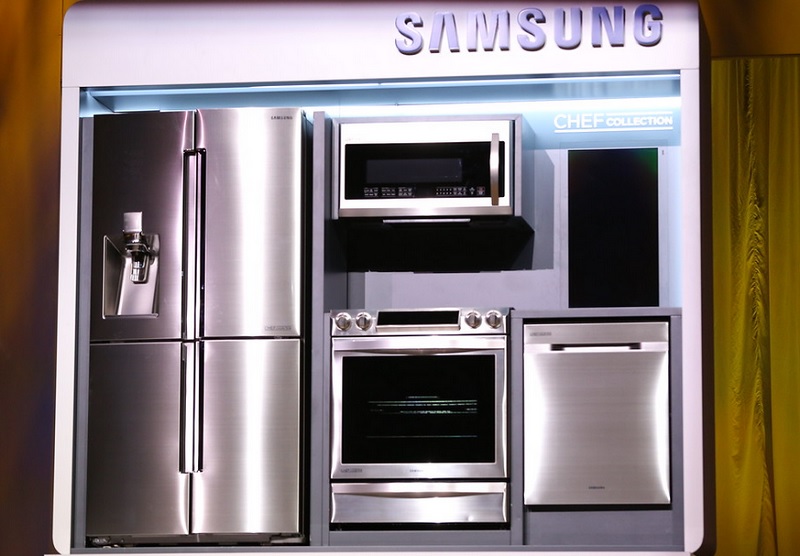 Every major tech company touted the Internet of Things (IoT). It’s a gold mine that naturally stirs the hype machine because it means tech companies can sell us all sorts of gadgets in the future. In fact, every product will become smart and connected, giving the tech companies an inroad for taking over other industries. But beyond the hype, the reality was solid for IoT devices at the show. We saw connected lightbulbs, smart pet feeders, teddy bears with health sensors, self-watering flowerpots, smart toothbrushes, and many more.

These devices will connect to the Internet and have their own IP addresses. They’ll get smart enough to capture data from sensors and process it in a way that can be delivered in an understandable way to our smartphones or the web. And then we’ll get some meaningful insights about how we spend our time. Purveyors of IoT devices will have to be careful not to overdo it and generate a backlash, however. On top of that, they’ll have to work hard to bring down prices closer to the level of equivalent dumb appliances, once the sales volumes start to rise.

2. The car is the new supercomputer 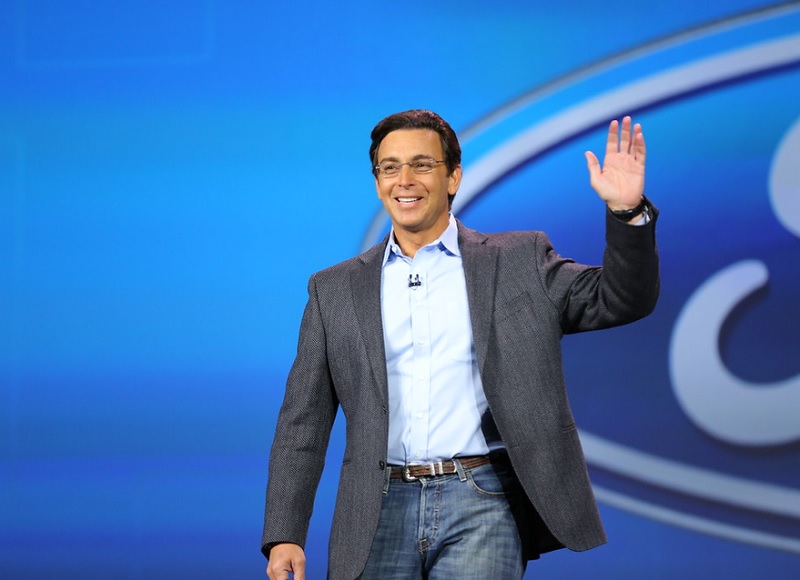 Above: Ford CEO Mark Fields at a keynote during CES 2015. He promised social driving services.

Nvidia brought this point home as it introduced two new computers for the car, one for the information you’ll see on your dashboard and another for the autopilot system in a self-driving car. Nvidia CEO Jen-Hsun Huang noted that the Tegra X1 processor for the car can process data at 2.3 teraflops, or twice the computing power of the most powerful supercomputer in the world in the year 2000.

It’s worth noting that the Internet-connected infotainment system should stay separate from safety-related computers such as the autopilot, so that hackers who break into one can’t get access to the other. Tasks such as learning to drive safely take a huge amount of learning, and that means artificial intelligence technologies such as “deep neural networks” have to be used to perform real-time tasks such as identifying pedestrians, making the driver aware of fast-moving cars that are coming up behind, or finding the best parking space at your destination.

Cars should be able to house computers that have much better capabilities than our smartphones, but the effort will be to make sure that the car computer doesn’t become obsolete too quickly. 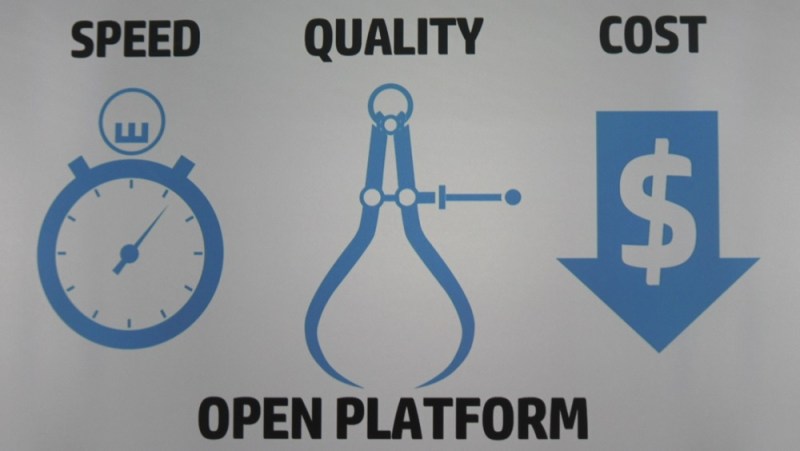 Above: Intel’s ideas for open platforms

Smart homes, cars, and appliances are coming. But they won’t take off if they can’t work together. The Internet of Things could become the biggest network of devices of all time by the year 2020, with 50 billion connected devices, according to Intel. But that won’t happen if the companies involved don’t make interoperable standards. Companies give lip service to this idea, but they all jockey to create a standard that includes their own favorite technologies.

Qualcomm talked about its AllSeen and AllJoyn alliances for smart home devices and smart lighting, respectively. But those standards will compete with the Open Interconnect Consortium devices being promoted by the likes of Intel and Samsung. Samsung said it would invest $100 million in creating standards for the Internet of Things. That’s good, because the last thing we need is a Tower of Babel for all of our smart devices. But since the movement is beginning now, it means a lot of early devices will have to be adapted to fit with these standards in the future.

4. Virtual reality has its leaders — and its competitors 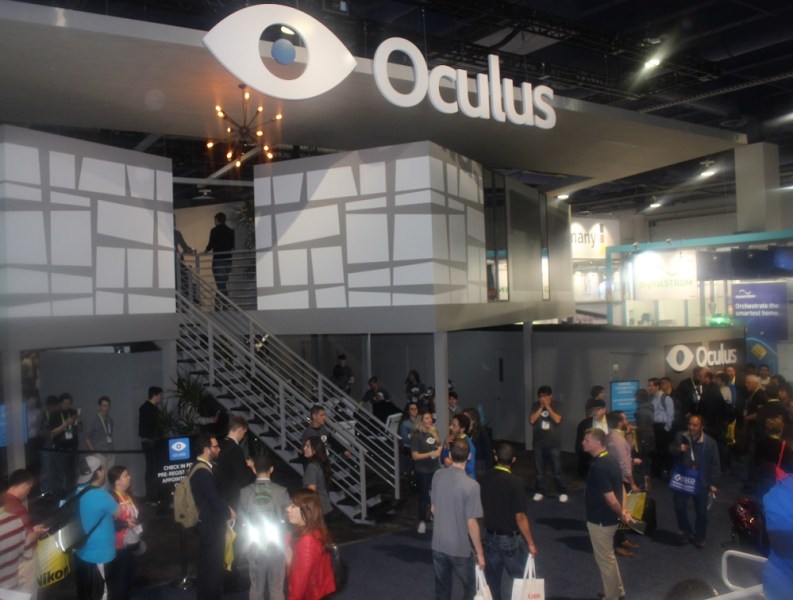 Oculus VR was the elephant in the gaming sector of the South Hall of the Las Vegas Convention Center. The virtual reality goggles maker, which was acquired last year by Facebook for $2 billion, came back with a huge booth and a top-notch Crescent Bay demo that thousands of attendees experienced. Samsung, which uses the Oculus Rift headset, made a big push for its Samsung Gear VR smartphone-based VR headset, and it launched the Milk VR video service as well.

Oculus Rift’s competitors were plentiful. Sulon’s Cortex headset, Razer’s Open Source Virtual Reality platform, and other VR vendors also made appearances at the show. Virtuix finalized its Omni Treadmill, and it is eagerly waiting for more headset makers and accessory makers to ship their VR goods. It’s going to take a whole ecosystem for VR to thrive. Yet VR itself is going to have competitors, like augmented-reality smartglasses that can show you cool imagery on the inside of your glasses, but still allow you to see the outside world. Osterhout Design Group had one of these. It’s expensive now, like Google Glass, but time will make it more competitive. 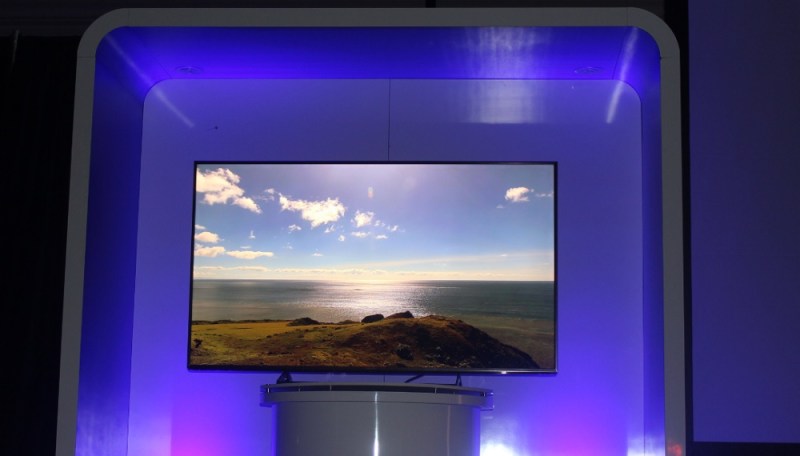 Above: Panasonic UltraHD TV at CES 2015

UltraHD TVs were in every major booth, and they were the most talked-about product at the show. These TVs have a resolution of 3840 x 2160 pixels, or four times as detailed as the 1920 x 1080 pixels of high-definition TV. They’re sharper and don’t pixelate as much when you focus in on one section of the screen. On top of that, many of the TVs can accommodate faster-moving imagery, and they’re all inherently connected. And many of the screens are curved. No doubt the costs are coming down as well. All of that means that the variety of UltraHD TVs we will see this year will grow.

Samsung talked about its SUHD TVs that will have resolution just shy of 8K TV, or 16 times the number of pixels in a high-definition TV. And Sharp also described a screen with 167 percent the resolution of 4K TV. One difference this year: Companies such as Samsung and Sony were making a big effort to make more UltraHD content available, and that’s the ultimate driver of sales.