The mobile web versus the native app has been a long story of victory — for the app. In the U.S., 80 percent or more of mobile users’ time is spent in our favorite native apps: Facebook, Game of War, Tumblr, and the list goes on.

But what about the rest of the planet?

According to Opera Mediaworks’ Q2 state of mobile advertising, not so much. In fact, there’s only one other region besides the U.S. where the app is winning, and that’s a thinly populated dusting of tiny Pacific Ocean island-states such as Melanesia, Micronesia, and Polynesia.

So unless Guam and Easter Island are the bleeding edge of the wedge, don’t count your chickens just yet.

The real question is whether the U.S. is ahead of the curve, or behind.

And it is a real question, since traditionally leading mobile regions and current mobile hotbeds such as Japan and Korea are, along with the rest of the Asia Pacific region, dominatingly mobile web. Africa, though clearly growing fast, is a relatively immature mobile market, while the rest of the Americas are farther along. Interestingly, Europe, a mature market, is also more mobile web than app, while the Middle East’s mobile web use more than doubles its app use.

The data is based on Opera Mediaworks’ mobile advertising business, so it’s not necessarily conclusive.

But that ad business is uniquely global in nature due to that company’s acquisitive and conglomerative history, and it does cover 1.1 billion unique mobile users all over the globe — a significant slice of humanity. Opera’s traffic and revenue does skew American, however, and the total share of both ad impressions and revenue it generates via apps is still much higher than what it generates via the mobile web — 56 percent of its impressions are app-based, and 71 percent of its revenue is app-based.

But it will be interesting to see where the maturing markets go over the next few years.

In other news from Opera, there’s a reason why Facebook is killing it, and there’s so much competition, noise, and energy in the social space. Social networking is taking a huge chunk of mobile time, generating over 30 percent of ad impressions and over 17 percent of revenue in the mobile ad ecosystem. 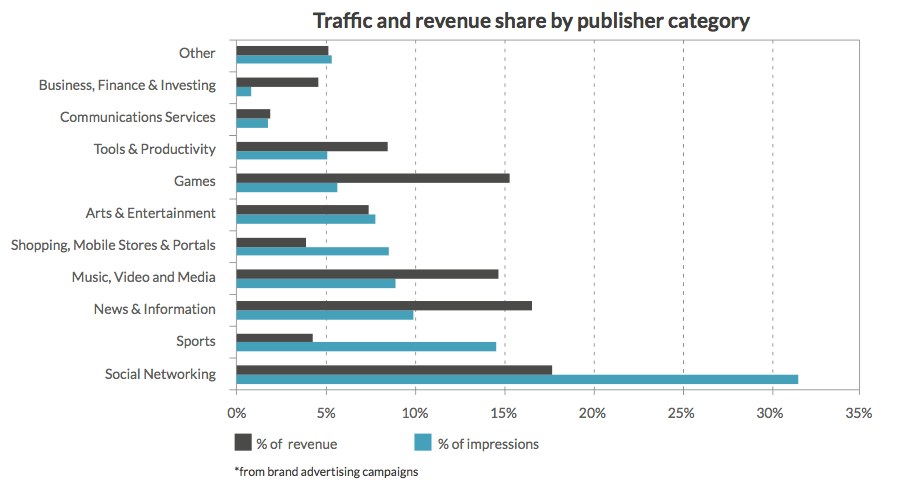 Not shockingly, the Business, Finance & Investing category delivered the greatest revenue per impression, Opera said, as it has for some time. One caveat: This chart ignores non-brand performance marketing initiatives, so it’s not a complete view of the space.

As expected, the first app of the day is a social networking one. At our recent MobileBeat 2015 event, I asked the audience whether they opened Facebook first thing in the morning, and a sea of hands went up.

The last app of the day, however, is usually entertainment.

In fact, only four app categories out of dozens are most commonly the first or last apps of the day. They are social and entertainment, of course, plus News/information and Games. The category with the highest loyalty? News/infomation. 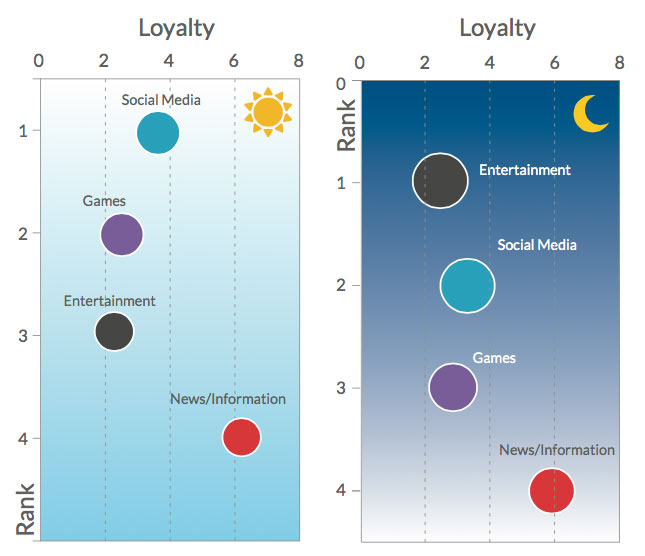 Neither that loyalty information, nor the fact that the lion’s share of time and revenue is accruing to social apps, is good for Google on mobile. While the company acknowledged a level of failure with Google+ and is still searching for a way to replicate its desktop web search advertising power on mobile, Facebook is reaping the rewards.