While Pebble’s focus so far has been on getting its hardware out the door, the real interesting stuff is happening with the device’s software.

Today, Pebble announced a number of big updates to its smartwatch, which it’s trying to make a lot more welcoming to third-party software.

For users, the big news is that the device will finally support all notifications coming through iOS 7 — not just calls, texts, and emails. With the functionality, apps like Snapchat, Uber, and Google Maps, can deliver notifications straight to Pebble users’ wrists, unlocking the sort of functionality owners have long dreamed about.

As the video above shows, the updates let Pebble display information like flight details, game scores, and news updates in a way that’s simple and unobtrusive. As Pebble likes to say, it’s all about creating “tiny moments of awesome.”

Alongside the new iOS features, Pebble also announced that it’s working with companies like Foursquare, Yelp, and GoPro to create official smartwatch apps. “These apps push the limits of what Pebble can do on your wrist,” Pebble CEO Eric Migicovsky said during the announcement today. 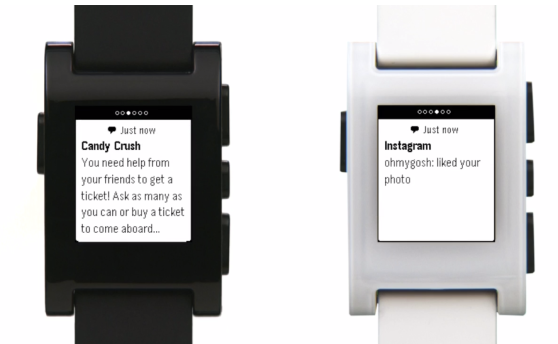 Above: These are the sorts of “tiny moments of awesome” Pebble likes to talk about.

Those apps, as Migicovsky notes, take advantage of the beefed-up Pebble SDK, which lets third-party developers unlock features like the device’s accelerometer. Finally, Pebble announced that it’s turning on the watch’s Pebble Bluetooth Low energy chip, which is what will let it work so well with iOS 7.

All of these updates follow Pebble’s announcement that it’s shipped 190,000 watches since January, which is no small feat for a company that’s had more than its share of manufacturing issues. If Pebble’s updates today are any indication, most of those issues seems to have been ironed out.

That, in the end, lets Pebble focus on its other, arguably more important, mission: “To create a solid foundation for third-party apps.” That’s a big deal, because while Pebble may have hypnotized its Kickstarter backers with its hardware, it’s software that’s really going to ensure the watch actually stays on people’s wrists.