An Oslo, Norway-based startup, Elliptic Labs, has launched a software development kit and hardware proof-of-concept of a new way of controlling your smartphone or tablet — with simple touchless gestures. The company says it has major Asian smartphone manufacturers onboard for shipping products next year, is demoing the product at CEATEC in Tokyo today, and is already playing Fruit Ninja and Subway Surfer on an Android phone as if it was an Xbox Kinect game.

The technology, Elliptic says, was inspired by nature — by bats, in fact.

“We came out of university with an idea that it was possible to create a user interface technology using ultrasound, just like a bat navigates in the darkness,” cofounder Haakon Bryhni told me yesterday.

The touchless gesturing works via a dedicated ultrasound transmitter that continuously sends inaudible signals from your phone. When some of them bounce back because your hand is gesturing near your phone, a sensor picks that up and interprets the motion and then tells your smartphone what to do. In a shipping device, the technology would be entirely “stealth-mounted,” hidden from view. 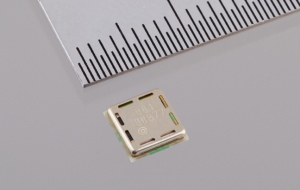 “We have a 180-degree sphere of sensitivity up to half a meter away from the phone,” Bryhni says. “You can read a newsmagazine, just very casually moving your hand to change the page, you can switch applications, change tabs, adjust sliders, close tabs, switch channels, play games … anything you can do on a smartphone you can do with your hands.”

Perhaps not exactly anything.

I asked, for instance, if Elliptic Labs’ technology would enable a sort of air keyboard, helping you to type quicker on a small mobile device. The company investigated that possibility, and apparently it’s possible but not user-friendly. It’s challenging for people to hit the exact right spots. Games like Fruit Ninja, which requires general swipes that mimics sword slashes, work incredibly well.

The device, which is just 3mm square and can be hidden in a smartphone, is incredibly sensitive:

“We can do millimeter accuracy,” Bryhni says. “If you move your hand just one millimeter we can detect it, and the device has very short latency — shorter latency than a touchscreen in fact.”

The real question, of course, is when this technology will ship.

Microsoft opened up the entire field with the Xbox Kinect, and Leap Motion has taken touchless gesturing to a whole new level with its very sensitive, powerful device that is now embedded in select laptops and desktops. And just as important as the device is software support, which Leap Motion is building via its Airspace app store and over one million downloads in just three weeks.

Not to mention, of course, the Samsung Galaxy S4, which has been shipping with basic camera-driven touchless gestures for months.

Elliptic thinks it has a better solution than Leap Motion’s or the S4’s. And, it claims, its technology will be widespread in the market in 2014 thanks to major Asian smartphone manufacturers who are coming on board.

“Our clear differentiating feature is that we are also running on smartphones and tablets,” Bryhni told me. “Leap Motion requires two cameras mounted at 90 degrees to the screen, which won’t work in a smartphone or tablet.”

The company can’t mention any names, but it says that the Asian smartphone manufacturers are all “names you would recognize.” In other words, less Xiaomi and more Samsung, or perhaps HTC. One big factor in Elliptic Labs’ favor is cost — the ultrasound device is only about $1.30 to $1.50 worth of hardware cost. That — plus a small licensing fee — gets high-resolution touchless gesturing for an Android smartphone manufacturer — a potential marketing coup.

And while Elliptic Labs is also working with U.S.-based manufacturers, Bryhni says they’re not as quick off the mark.

“Asian manufacturers are more aggressive than North American OEMs,” he told me.

Next up for the young Norwegian company is touchless sensing even when the phone is asleep, something that the company has been working on and which would enable you to, for instance, change the song or playlist without waking up or touching your phone. And, of course, actually getting its technology into shipping products.

So we can all play Subway Surfer with our fingers in the air.