“Should I bring a towel?” I asked, elbowing my way into an invite to Nebia‘s shower lab. Hours later, I stripped down for the most awkward gadget review ever conceived.

It was wonderful. I went full-Scoble. 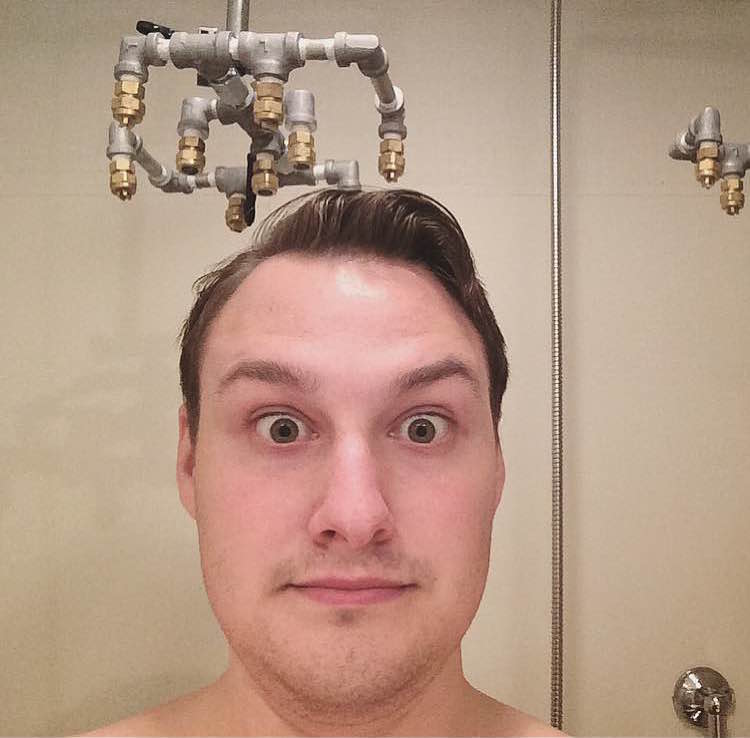 Above: Harrison “I will regret this” Weber tests an early prototype of Nebia’s shower system.

The startup, backed by a rare lineup — Tim Cook, Schmidt’s Family Foundation, Y Combinator — launched preorders for its first product, a shower head, on Kickstarter last night. The size of Nebia’s seed round was not shared, but Y Combinator is known to invest at least $120,000 by default. Nebia aims to raise at least $100,000 more on Kickstarter.

The simple gadget, lacking an app or any “smart” functionality (circa 2006), blasts a steamy mist with the force of a miniaturized jet engine. In the cloud I closed my eyes, leaned back, and braced myself, realizing I’d soon look like a sap for a YC-backed shower head.

But Nebia isn’t just out to create some pricy shower system. CEO Philip Winter claims the device uses 70 percent less water than a traditional shower, and he hopes to scale the product to a point where it’s cheap enough to bring to developing markets.

Until then, you can pre-order this $299 shower head for yourself on Kickstarter.

Nebia sold me on the product shortly after I stepped barefoot into its workshop. There I tested a rough prototype of the device, assembled at the startup’s Soma headquarters. Weeks later, I spoke with Winter by phone; he caught us up hours before Nebia’s Kickstarter debut.

Philip Winter: We finally got the working prototype, so we’ve got the real thing. And essentially the last 10 days we’ve been scrambling … we got them all basically the last day we could. Had more than our fair share of leaks, but we got it to work.

And we’ve been meeting with the press this past week and getting ready to launch tonight.

Harrison Weber: Does it feel different? [The final prototype]

PW: It feels very similar. It feels better because the distribution of the nozzles is sort of the way we wanted it to be, because we’re not just using off-the-shelf plumbing pieces. But what feels way better is being under something that’s beautiful aesthetically, it compliments the experience ten-fold.

PW: No industrial thing… It looks gorgeous. It just works.

We got permission from our investors to publish their names. I don’t know how much you remember the story, but we moved here about a year ago and, you know, didn’t really know anybody in San Francisco and sort of met with whoever we could get coffee with. Eventually we got a pilot at Equinox, which led to a pilot at Google, which led to a pilot at Apple, and then Stanford, and eventually we got into Y Combinator, which was huge. But prior to that we had our first angel investor, Tim Cook.

HW: Shit. How do you feel about that?

PW: He’s been an investor for a while. I feel phenomenal. He’s an incredibly thoughtful person and he’s been incredibly helpful for us. I don’t know if you’ve followed this, but he’s an environmentalist at heart.

And our other investors are Michael Birch, who is the founder of the Battery and Bebo; he’s a big supporter of Charity Water. And then the Schmidt Family Foundation, Eric and Wendy Schmidt’s foundation. And then Y Combinator and friends and family.

HW: How’d you get hooked up with Tim Cook?

HW: Is he an advisor as well as an investor?

PW: He’s an investor, and he’s shared lots of feedback.

HW: Cool. Um. So you’re in YC. Why’d you — I have to ask — why bother being in YC when you have Tim Cook and Eric Schmidt’s foundation on your side?

PW: At the end of the day it came down to, we met them, we were fortunate enough to get an interview, and they showered during the interview, and it was really cool for us to see how they literally, figuratively rolled up their sleeves. And after week one we were like, “this was the right decision.” Far and away, it is an exceptional group of people.

HW: Has YC pushed you to do a digital component? You were telling me before about how you didn’t want to do an app.

They didn’t push us, but they did push us to launch two months earlier than we wanted to [laughs] and we are [laughs], consequently. They really pushed us to accelerate as much as possible and we did, and we’re launching in four hours.

HW: And when did you get your final prototype? 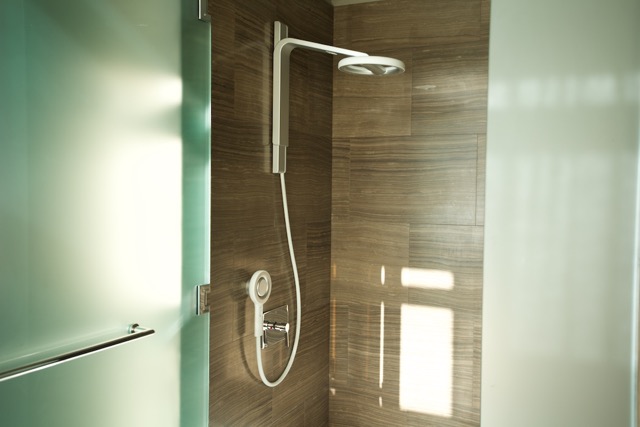 HW: We were talking about the duality of conserving water — there’s a social good element there — but at the same time, you got this investor from the Battery. Someone is going to use you, a shower startup, as an example of what’s wrong with startups. What is your reaction to those people?

PW: I mean, California has a serious issue, but it’s not just California — we started in Mexico — and we made a very intentional decision to build a product that is better in every way. If people criticize that, then that means we’re doing something provocative on some level; I’m not afraid of that … we’re building a 20-year company.

Part of the reason we had to move here is because the technology is expensive at low scale. Once we bring it to scale, we can dramatically bring down the cost and bring it to the developing world.

HW: I figured I’d give you the chance to answer that now. On the surface, you say shower startup, and it sounds kind of trivial. You say, what’s next? A sink startup?

PW: Part of our comeback is, no, we’re not a smart shower. We’re totally mechanical. We have no software. Look, California is in a serious drought. Nebia can make a dent in that. There are a lot of other things that need to happen to solve the drought — I’m not delusional — but at least there’s some innovation coming out of California to address a very present need and we’re not just Uber for X.

For more on the tech behind Nebia’s shower, head here.