It’s hard to believe that when the iPhone launched in 2007, Apple planned to eschew third-party native apps altogether. From that nearly missed opportunity, iOS went on to not only change course and offer the App Store, but to create a blueprint for mobile software distribution that has been adopted by every smartphone platform since.

Currently home to a staggering million-plus apps (1.4 million at last count), and still trailing Android’s massive catalog, the App Store is a shining paragon of market-building, having enabled an economy worth billions of dollars annually to both Apple and its developer community.

But Apple’s and Google’s mobile software shops have become victims of their own successes; both stores are bursting at the seams, with noise far outweighing signal.

Although significant change is unlikely to come to either of these stores, there are targeted ways in which the glut of apps could be made more manageable for consumers. In fact, one need look no further than Amazon’s Android Appstore for a better model of app management.

The problems with choice

Want an auto redialer on Android? There are no less than 36 apps whose names signify that functionality. How about a voice recorder for iPhone? Too many results to count. And games? You’ll get buried by Tetris clones, alone.

This is a problem, from a number of perspectives — and it has little to do with volume. Having more apps available is not necessarily a bad thing, but having more of the same (and of course, spammy apps) is undesirable.

This phenomenon is explored in Barry Schwartz’s 2004 The Paradox of Choice, in which the author, a social psychologist, argues that people derive little benefit — and can actually develop anxiety — from expanded options, when the choices are relatively similar to one another.

To wit, a 2012 GigaOm survey showed that the majority of developers earned $500 or less per month from their App Store participation that year. While this may be tolerable for developers looking to supplement other income, it can’t sustain the resources necessary to build intricate, feature-rich apps.

Finally, it’s a problem for the very platform stewards enjoying the otherwise advantageous position of market leaders, in that customers oftentimes look to them to fulfill the need for app discovery — an increasingly complicated task.

In an interview with VentureBeat, senior director of industry analytics at analytics firm App Annie, Ross Rubin, said, “As the number of apps have proliferated, surfacing them has been a huge challenge and given rise to the practice of app store optimization, much as search engines gave rise to search engine optimizations.”

“There are, of course, the top-ranked charts, apps being used near you, cohort apps based on what users who own the apps also downloaded, kid-friendly apps, and apps that support new devices such as the Apple Watch and Apple TV,” he continued. “These are all ways that the stores are seeking to provide more visibility.”

Perhaps the most disheartening aspect of app overload is the fact that the stores’ gatekeepers — Apple, especially, but more recently, Google, too —already present a pretty high barrier to entry. Even with plenty of hoops to jump through, developers have still managed to stuff these repositories with millions of apps. There’s little hope of separating the wheat from the chaff at the entry point, at least any more than is already being done.

A page from Amazon’s book

With little hope of slowing down the endless stream of new applications, app markets can only attempt to provide their users with better discovery tools. And this is where I think Google and Apple currently fall a bit short.

As it stands, neither store offers a comprehensive set of filtering options — that’s especially surprising in Google’s case, given the rich, advanced capabilities of its web search engine.

What’s not surprising, however, is that Amazon — an entrenched retailer intimately familiar with the problem of organizing large catalogs of physical and digital goods — does a better job than either Apple or Google in this department.

Amazon’s Appstore for Android applications is one of the most ambitious third-party software depots for a major platform, to date. It’s the default store on the company’s Fire lineup of devices, and comes preloaded alongside the Play Store on other Android products whose OEMs have struck a deal with the sprawling etailer. 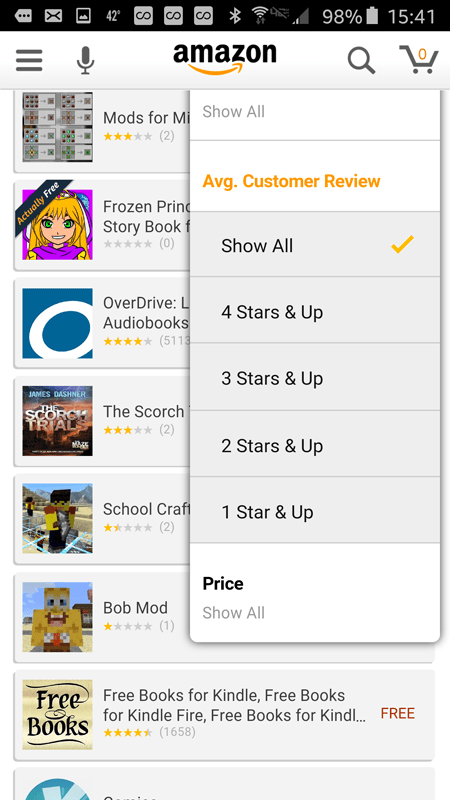 Amazon’s AppStore works like any other department on Amazon.com (e.g.: Clothing, Books, Electronics). There, Amazon highlights recommended apps based on a particular shopper’s browsing and buying habits. Why isn’t Apple leveraging its plethora of data on app usage habits to mimic this functionality?

On the Web, Amazon’s omnipresent sidebar offers a plethora of options for searching and drilling down results (filters that are duplicated in dropdown menus on Amazon’s phone and tablet apps). And it highlights the absence of seemingly basic filtering tools in Apple’s App Store and Google Play, such as the ability to parse by minimum average review score (no matter what that minimum may be).

I suspect that the average user doesn’t want to do a lot of work to find apps that might interest them, and in fact, that most app downloading past the initial device setup period is done piecemeal. But for those who want to put in a little more work, who care enough about finding new apps to bother searching and browsing for them, the experience would be a lot more fruitful if they had more than the very basic tools currently offered — tools which haven’t changed much since the stores’ respective debuts.

Given their proven success as revenue-generating machines (at least in the aggregate), and the growing pool of talented programmers, mobile app markets are only going to continue to swell larger and prove more unwieldy. That makes the need for better discovery tools an increasing priority, lest the “paradox of choice” serve to keep even more device owners from fully engaging.