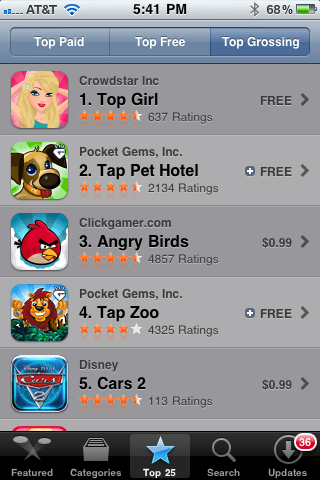 Let’s see… what shall Top Girl wear to announce her game has surpassed one million downloads after only 10 days in the App Store?

Perhaps a red-feathered boa, since three days after CrowdStar launched the game it passed Angry Birds, becoming the top-grossing game in the App Store. That’s quite an achievement, considering, as CrowdStar’s director of mobile Blair Hamilton points out, that “compared to other top-grossing games like Angry Birds, which targets all players, we really only target half the equivalent audience because it’s a female friendly role-playing game.”

Top Girl is Burlingame, Calif.-based CrowdStar’s first game for mobile devices. A YouWeb-incubated company, CrowdStar is the developer of social games on FaceBook including Happy Aquarium.

Top Girl is a mobile role-playing game that leverages a virtual shopping mechanic, turning users into mobile models that must climb the fashion social ladder by doing modeling jobs, buying new outfits and going to popular clubs. The game has a dating feature in which users flirt with boyfriends who give gifts.

The game, which uses the mobile social network of OpenFeint, is monetized with virtual goods. It’s only available on iPhones, iPads and iPod Touches, although CrowdStar will likely create an Android version.