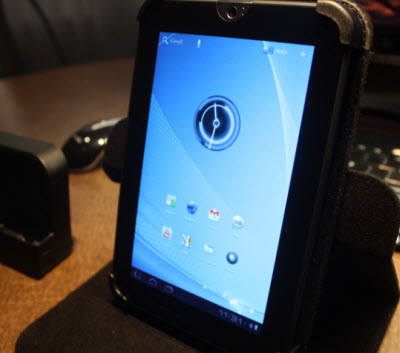 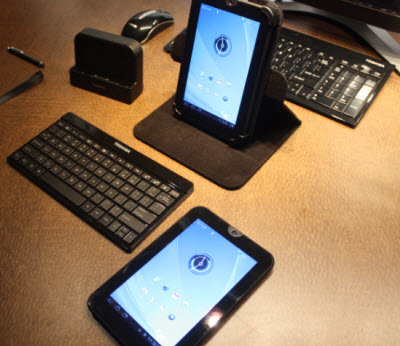 The launch underscores the trend toward more mobile, more compact computing devices with touchscreens. While Apple has been on the leading edge of this trend, Toshiba’s entry into this market shows that they’re becoming more mainstream. Toshiba hopes that its expertise in designing portable technology will help separate its tablets and all-in-one computers from the pack.

The new Thrive 7-inch tablet will come out in December as a companion to the 10-inch model launched in July. The 7-inch tablet weighs only .88 pounds and is .47 inches thick. So it’s a thinner and lighter option for people who don’t want to get stuck with a tablet that is about as heavy as a laptop. 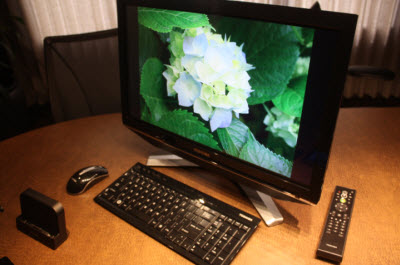 Phil Osako, director of product marketing at Toshiba, said in an interview that the new tablet is great for demanding applications such as games, movies and electronic books.

The fast touchscreen has a resolution of 1280 x 800, good enough to set the tablet apart from the competition. The tablet has Toshiba’s LED (light-emitting diode) backlit AutoBrite multitouch display, with Toshiba’s adaptive display and resolution technology.

The tablet will run on Google’s Android 3.2 software, and it uses Nvidia’s dual-core Tegra 2 mobile processor. The tablet has two high-definition cameras, including a front facing five-megapixel camera with an LED flash. Toshiba will offer the tablet with either 16 gigabytes or 32 gigabytes of flash memory. In contrast to the Apple iPad, the Toshiba Thrive has multiple ports, including Micro USB (universal serial bus), Micro SD, and Micro HDMI slots. It has built-in Wi-Fi, Bluetooth, and Adobe Flash support. It has high-quality speakers and an optional dock and keyboard. Users will have the option of getting either Intel Core i5 or Core i7 microprocessors. 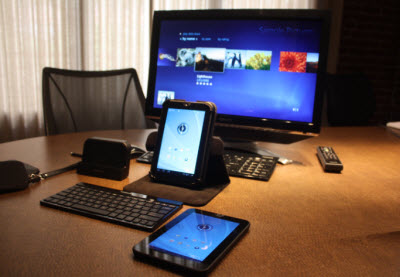 Toshiba hasn’t set the price yet for the new tablet.

The all-in-one computer is targeted at consumers who want to use computers in bedrooms, offices, kitchens or dorm rooms. The Toshiba DX735 replaces an earlier 21-inch model with a 23-inch screen. The goal is to bring the touchscreen interface to new computers.

It offers high-end audio, good video performance, and other features in a standard Windows computer. It has a 1.3-megapixel web cam and wireless mouse and keyboard options.

The all-in-one will be available around mid-October.