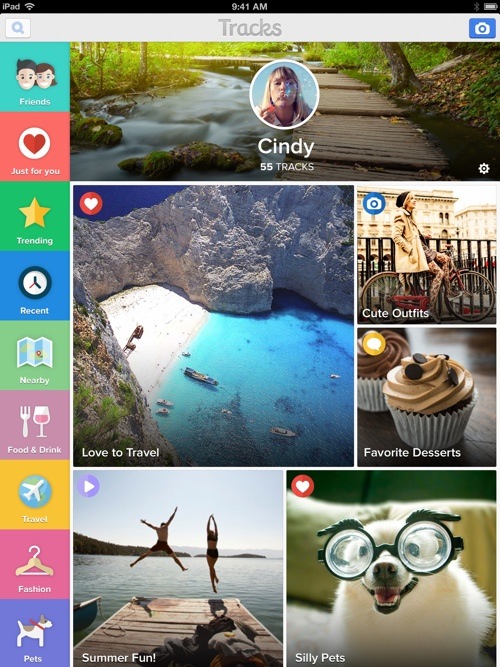 New York City-based Tracks has gone through quite a few changes over the past few years — originally conceived of as a geo-blogging platform, it eventually ended up launching as a private social network for your life experiences in the summer of 2011.

Now Tracks is making yet another big leap, and it could be its most important one yet.

The company is releasing version 2.5 of its iPhone and iPad app today, which shifts the focus away from just creating private social networks around experiences (dubbed “tracks”) to finding interesting content from your friends and people with similar interests.

“The engagement ladder is now turned on its head,” said Vic Singh, Tracks’ founder and chief executive, in an interview with VentureBeat. “Now we’re driving consumption first, which leads to creation.”

Given that there are far more content consumers on social networks compared to content creators, the shift seemed a long time coming. Instead of opting for the follower model of so many social networks, Tracks is aiming for more of a collaborative model, Singh said.

With its initial private social networking model, Tracks felt reminiscent of the hyped up app Path. But instead of having a single private social network that’s exclusive to your closest friends, Tracks basically made every one of its “tracks” a tiny private social network. Only people invited to a particular Track could see and engage with the content — the problem was that limits most of Tracks adopters to people who want to create content.

Singh, who is also a partner at NYC’s Eniac Ventures, sees Tracks’ new focus as something more akin to Pinterest (which he wagers is the “last big web-first company”). To that effect, the company also added the ability to “reTrack” photos and videos to another track. That’s a simple feature (also similar to Twitter’s retweets and Tumblr’s reblogs), but it’s an important one as Tracks refashions itself into an app for finding new things.

After all, what’s the first thing you want to do when you find something cool? Share it.

Tracks currently has nine employees and has raised $2.5 million in funding. Its investors include Alex Welch, the cofounder of Photobucket, Eniac Ventures, GC Seed, and Base Ventures.

Singh still sees plenty of potential in Tracks’ initial private social networking mission — but he reiterated that it’s still trying to be very different from Path.

“In life you don’t have a single path, you have a series of tracks,” he said.