Real-time bus and train schedule startup Transit, which has been riding a wave of Apple-fueled popularity to a first-place app store ranking in Canada and eleventh in the U.S., has launched transit directions in the world’s most populous metropolis, Mexico City, and Paris.

Mexico City’s mayor was so impressed, I heard, that he said something unprintable.

Naturally, you don’t beat Google Maps, a perennial app store leader, without being a good app. And you don’t beat out Google for an exclusive contract with the city — Google also been negotiating with Mexico City officials — without a compelling value proposition. But getting some help from Apple in the form of massive front-page app store placement doesn’t hurt either.

Now the startup, which is already available for most major North American cities such as San Francisco, New York, and Toronto, is capitalizing on that success by bringing out new cities as quickly as possible. 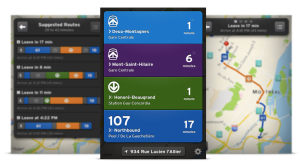 “Adding new cities is quick,” Transit CEO Sam Vermette told me today. “But we have so much on our plate that we need to hire more people to help.”

Manila is another possibility, as Vermette told me an individual that helped Mexico City release its transit data in an open format is also active in the Philippines, and since the company has a French foothold in Paris, other French cities are prime targets as well.

One thing that will help is a new Android app the company is releasing probably next week, but “certainly by the end of the month.”

That’s critical, because Europe is more Android than iPhone, and that’s triply true of major Mexican markets like Mexico City, simply because of demographics and economics: There aren’t a ton of average-income Mexican citizens who are currently buying Apple’s more-expensive iPhone.

Which means that Transit better capitalize on its app store popularity quickly. Apple is still featuring the app prominently in the Navigation category, but that has a tendency to change when companies bring out Android versions. Still, Android

Of course, that’s not the only issue for a company that depends on open data.

“We do have to deal with bad data from cities,” Vermette said. “Half of the bus routes in our Paris data are expired.”

The company’s fighting that by fixing the data itself, and in working with cities to update their data. It’s a challenge working with city’s 20-year-old software and hard-to-change bureaucracy. Some of the $800,000 seed round the company is raising right now will go to additional staff to help, but most of it will go to developers to build out the platform.