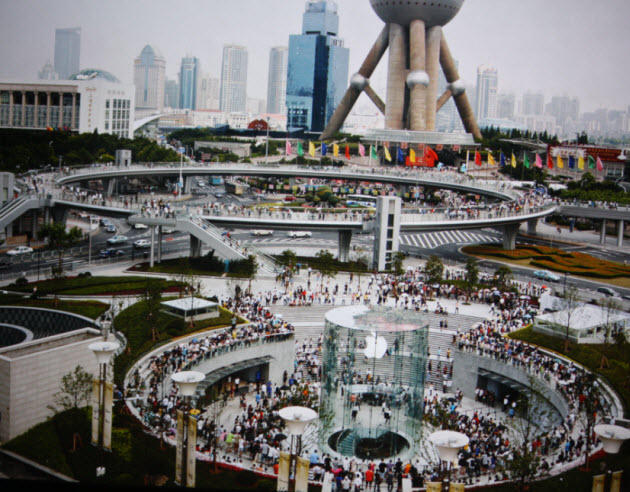 Users of Apple’s recently released Chinese iPhone 4 are in for a nasty surprise: Apparently, the phone comes equipped with ensored map data that complies with Chinese government propaganda, according to the site Ogle Earth.

The Chinese iPhone 4 Maps app depicts borders as the Chinese government would have it — for example, the Arunachal Pradesh region shows up as part of China, even though it’s actually administered by India today. If Chinese iPhone 4 users connect to a VPN, or virtual private network, a service which lets them get beyond the government’s firewall — they’re still stuck with the same dataset. Previously, iPhone 3GS users could log onto a VPN to view maps with correct international borders.

Even worse, the censored maps data is also missing significant amounts of street data for the rest of the world, Ogle Earth points out. In Rome (and much of Europe), there are no street names at all — whereas in Paris, Montreal, and Sydney street names are only in Chinese.

In addition, users of China’s iPhone 4 are also finding that searches conducted via Safari’s Google search bar are always getting redirected to Google.cn, and they have to manually click a link to get redirected to Google.com.hk — the company’s unfiltered Hong Kong site. This isn’t necessarily a surprise — the redirect process matches the way Google searches on computers in China now work after the company stopped censoring search results.

What’s strange about the Chinese iPhone 4’s behavior is that it forces users to redirect from Google.cn no matter what their phone’s region is set to. Everywhere else in the world, the iPhone 4’s Safari search bar is dependent on their region settings. Even if Chinese iPhone 4 users connect to a VPN they’re still redirected to Google.cn. Previously, users of China’s iPhone 3GS were able to sign on to VPN’s to bypass Google.cn entirely.

While these software quirks are annoying, it’s still better than Apple’s first attempt at bringing the iPhone into China with the iPhone 3G — which didn’t have WiFi due to government regulations. Still, the limitations of Chinese iPhone 4s may convince some users to head back to the grey market for their iPhone 4, especially since they may be able to get the phone cheaper than Apple’s official pricing — the company sells the phone unlocked and contract-free at 16GB ($747) and 32GB ($895) memory configurations.