You can now share your live videos on Tumblr. The company has added publishing and discovery support for the increasingly prolific video format on its blogging platform, which means that you can now post your videos from YouTube (Android is available today, and iOS will be coming in the next few days), YouNow, Kanvas, and Upclose to your site.

When broadcasting from one of the four aforementioned apps, simply share the livestream to Tumblr. Your followers will receive a push notification when you’re live and if a live video is reblogged. The Yahoo-owned company explained that videos will be pinned in the “first position” at the top of your followers’ dashboards on web and mobile devices when they’re being broadcast live. A badge will be prominently displayed so you’ll know which service is doing the livestreaming — clicking on it will open up the app or prompt you to download it from the app store. 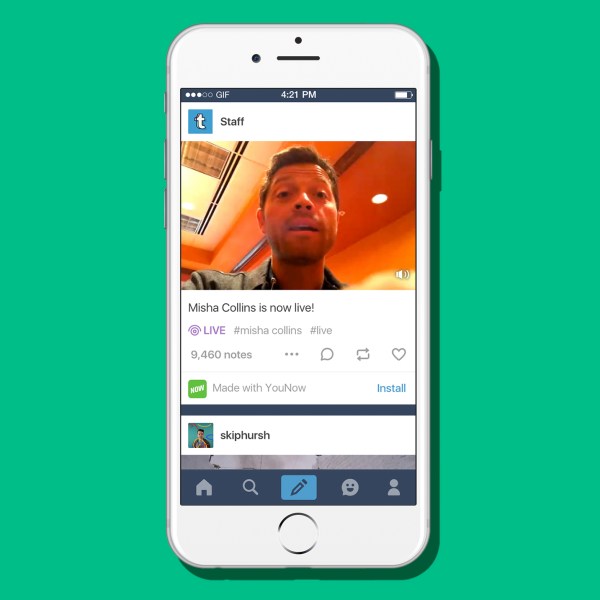 Above: Live video featured on Tumblr.

Live videos that are saved on the corresponding app will also live on your Tumblr page as a regular video post and will be available for quick replays. Tumblr said that although its “peers” have also invested in live video, it wants its platform to “serve as the best publishing and discovery platform for the content — no matter where it’s created.”

To begin broadcasting to Tumblr, make sure that you have the updated your YouTube, YouNow, Kanvas, or Upclose app.

The company also said that it’s working on producing dedicated content and events with a few partners, including MTV, Refinery29, The Huffington Post, and Mashable.

While it’s noteworthy that Tumblr is now supporting live videos, it’s still missing out on Facebook Live and Twitter’s Periscope, two services quite a few people are broadcasting on. However, it’s possible that the company wants to start off small or feels its new partners are a better match for the Tumblr culture.

Above: Tumblr has added live video support, enabling you to share broadcasts from YouTube, YouNow, Kanvas, and Upclose directly to the site.

The launch of this feature comes as the company’s parent organization is dealing with the issue of who’s going to buy it. And Yahoo hasn’t exactly been kind to Tumblr — the Sunnyvale, Calif.-based company revealed in March that it may write down all of the blogging platform’s value. According to reports, the relationship between the two companies has been less than stellar.

Perhaps the inclusion of live video will make up for it?

Updated on 8:07 a.m. Pacific on Tuesday: This post has been updated to reflect that with the exception of YouTube, livestream support is available on both iOS and Android for Kanvas, YouNow, and Upclose. Android support is only available for YouTube now but iOS will be coming in the next few days.