Windows Phone 8 users who just want to see a stream of random, but curated content need to look no further. Tumblr is finally here. 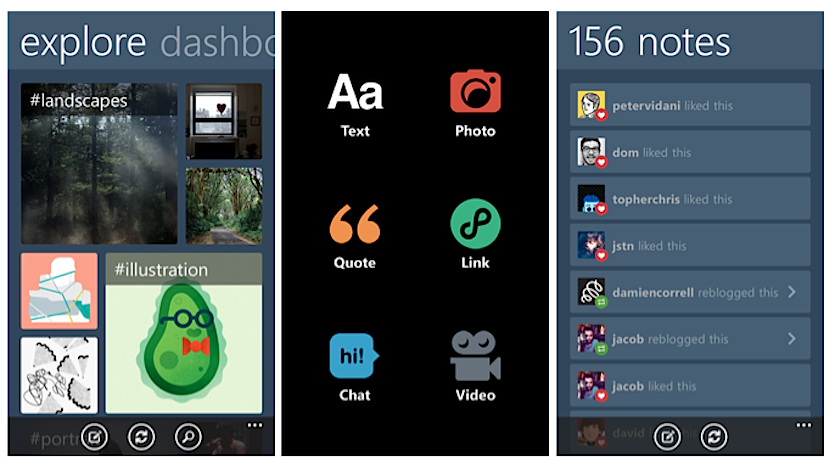 It’s all mobile for Tumblr these days. The company launched its Windows Phone 8 app today, shortly after revamping its Android version.

Where previously the Tumblr app was only available on iOS and Android, today’s news opens the “post anything” blogging site to a whole new host of phones.

The app is connected to the phone’s voice assistant. You can speak your posts and Tumblr will obediently (we hope) record the thoughts. It also shows content from the Tumblrs you follow on the live tiles, or the ever-changing home screen box graphics, as well as the lock screen. Of course, you’ll be able view gifs on the app as well as take photos from it.

It’s obvious Tumblr is focusing energy on its mobile side. The company recently released an update to its Android app that includes a playful revamp to its activities menu. Options to post videos, images, links, quotes, photos, text, as well as to chat appear to be spring-loaded, popping out of the bottom right corner of the app. This was done on purpose, since that corner is the easiest place to poke the screen with your thumb.

We don’t get that same, lively feel from the Windows Phone 8 app, however. Those working on the Android app likely have more resources than those working on Windows Phone 8. Android still holds the top spot on mobile marketshare charts, making it a much wider audience for Tumblr to target.

The app is available now from the Windows Phone App Store.