Perennially popular virtual private network (VPN) provider TunnelBear is rolling out a handful of updates to its desktop apps today, with a focus on looks, speed, and security.

Rolling out to Mac and Windows users, the most immediately striking facet of the new TunnelBear app is that it no longer sports the retro wood look and has been modernized for MacOS Sierra and Windows 10.

However, the most important updates extend beyond aesthetics. 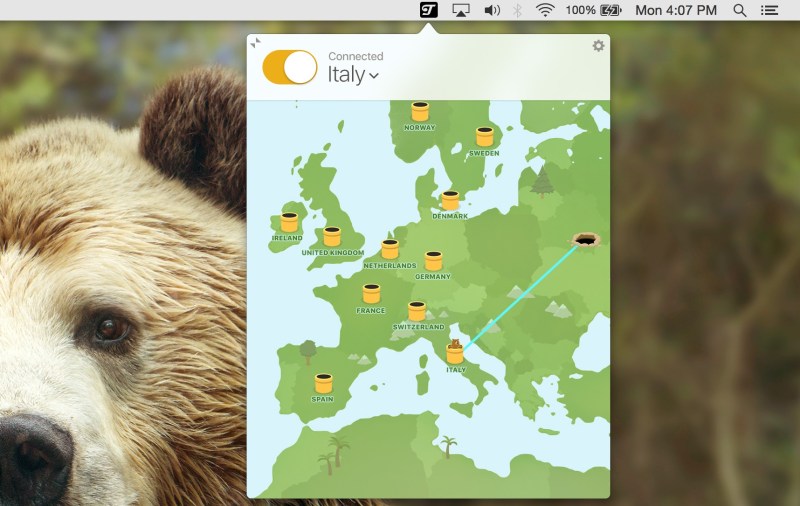 TunnelBear claims that the latest app connects and reconnects 60 percent faster than the old version, which for anyone accustomed to the old version is certainly good news — it was prone to taking its sweet time.

But for most people, security and privacy are the main reasons for using a VPN. For those who use public Wi-Fi networks, the new TunnelBear app has a few tricks up its proverbial sleeve.

First up, there is a new “Trusted Networks” feature that lets users add their home Wi-Fi network (and other trusted networks) to a safe list, so that TunnelBear can automatically turn itself on when connected to other networks. This is actually a great feature, and one that has been sorely missing from TunnelBear — it saves time, and it also saves you having to remember to activate your VPN when on a potentially less-secure Wi-Fi network.

Moreover, TunnelBear now serves up a warning when the Wi-Fi connection adopts obsolete or otherwise insecure standards — if it still uses the WEP security algorithm or if the router has no password, for example.

Another notable new feature is that when your Wi-Fi connection briefly drops for whatever reason, TunnelBear will continue to block traffic it deems to be unsafe while it’s reestablishing a connection. Before, if an internet connection dropped, there would be a period of time before the VPN reconnected when your data would be vulnerable.

The rise of the VPN

VPNs have emerged as key tools in recent times, as internet users strive to retain privacy on an increasingly insecure internet. Just this week, Norway-based technology company Opera Software launched a free and unlimited “VPN” as part of its main desktop browser — no extensions or add-ons required.

However, it’s worth noting here that there is a key difference between VPNs like TunnelBear and browser-based VPNs, such as Opera’s, which is actually more like an encrypted proxy than a true VPN —  it’s limited to activity that happens in your browser rather than working across your whole machine.

Though there are other big-name alternatives out there, such as Hotspot Shield, TunnelBear has gained a reputation as one of the easiest, most user-friendly VPNs. Indeed, when you switch the Tunnelbear VPN to a new location, a little bear tunnels across the screen to the desired region. This is perhaps a little gimmicky, but this fun element serves to make the experience less technical and ease new users into the world of VPNs.

The Toronto-headquartered firm has around 20 employees and is entirely self-funded. The company also says that it’s profitable. It lets users unlock unlimited VPN browsing for $8 per month ($4.16 if paid annually), or they can get 500MB per month for free.