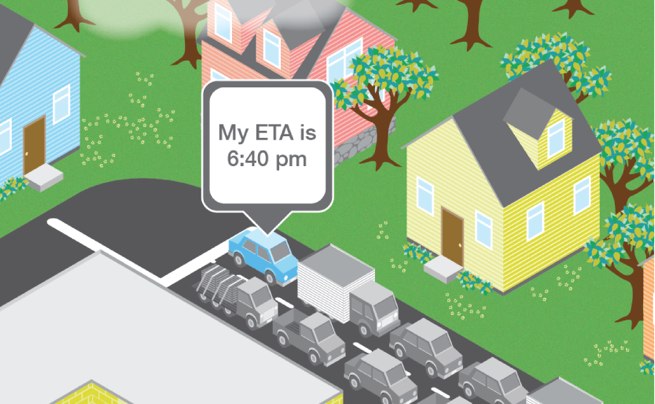 “Where” is yesterday’s news. The next big opportunity in mobile is “when,” according to serial angel investor Bill Lee, who’s backed the likes of Posterous, TweetDeck, and Yammer. Add Twist to that list, a startup backed and co-founded by Lee that today unveils its time-saving application for iPhone.

“Twist is about time,” Lee told me in an interview. “If you’ve ever wasted time waiting for someone, then you know the problem we’re trying to solve.”

The story goes that Lee got so fed up with waiting for late entrepreneurs to arrive to meetings and so frustrated by the lack of communication and last-minute time-juggling that he set out to create Twist.

“I figured there’s got be a better way to reduce that anxiety and help people save time,” Lee said. 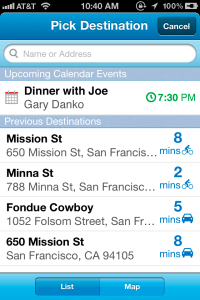 The Twist application, released on iPhone Wednesday, is a mobile utility that addresses Lee’s frustrations, along with a number of other common “when” scenarios, with precise updates on a user’s arrival time. So a person could start a Twist, as the process is called, to automatically notify a family member when she is on her way, inform a carpool participant when she’s about to arrive, or update a business contact like Bill when she’s sitting in traffic and running late for a meeting.

With Twist, our savvy commuter enters a destination or selects an event from her calendar, which is integrated into the app, identifies the parties she’d like to notify, and then goes about the business of getting to her destination as usual.

Then Twist takes over. The app notifies her friends via SMS (or push notification if they have the app) when she’s on her way and provides contacts with an almost-always accurate estimated time of arrival (ETA). Should anything prevent our commuter from missing her ETA, say traffic, Twist will tell her friends via SMS that’s there been a delay and include a new time of arrival. When she’s about to arrive, Twist will send one final update to her pals.

Twist even helps with the pre-planning and can tell our gal when to leave, with traffic data factored into the experience, and help her decide what to wear with weather information. 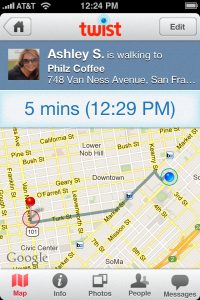 “This is a place where technology is underserved,” Twist’s technology-steeped co-founder Mike Belshe told me. Belshe, an early member of the Google Chrome team and founder of the SPDY protocol, has a personal and professional interest in saving people time. Twist, he said, simply replaces the actions we all take, such as texting a significant other when we’re on our way home or calling to say “hey, I’m here,” with a better solution.

Twist arrives on the scene with $6 million in funding following a year of quiet development. Funds from the Series A round being announced today were pooled together from co-founders Lee and Belshe, Bridgescale Partners which led the round, and eBay co-founder Jeff Skoll.

The where piece of the social, location, mobile (SoLoMo) movement may already be exhausted by a bevy of applications that help people share where they are, as Lee insinuated during our chat, but Twist’s best asset is very much tied to location. Specifically, Lee and Belshe pride themselves on having built an application that calculates ETAs better than anything else on the market.

“ETAs are fairly complicated,” Belshe said, citing Google Maps’ inability to provide accurate travel times between two destinations as an example. “We think we’ve tapped into something that most of the other guys don’t have, which is we know you. As you use Twist more and more, we keep learning from your behavior. We know if you’re a faster driver than average or a slower driver than average. We can look at historical routes and apply that. … We’re really focused on making sure those ETA times are great.”

Even Uber, the on-demand car service startup, could benefit from an infusion of Twist’s technology to improve the ETAs it provide users, Lee added. In fact, that example speaks to the company’s eventual plans to monetize the service. Twist, as a platform for time, could be used by apps, services, and local businesses to provide customers with more accurate arrival times, Lee said.

First, Twist will need to win over consumers, which may prove to be a tricky task. Twist’s system, as simple as it could be to work into your routine, requires just that: a change to the day-in, day-out routine that you’ve always known. Add to that the fact that you’re involving other people in this system, people who might not yet be acclimated to the idea of using an app to solve life’s little problems, and you’ve got a few kinks that could impede adoption.

But raise the question of usefulness, and Lee and Belshe will most certainly point you to a Harris Interactive survey, conducted on behalf of Twist, that found 24 percent of Americans admitted to having sent a text or email while driving to let someone know they were on their way.