It’s no secret that social media has been used for dubious purposes by various political figures and parties — we need only look at Cambridge Analytica’s role in harvesting Facebook data to target U.S. voters for the 2016 presidential election. But we now seem embedded in an era when politicians and their representatives freely promote falsities without fear of retribution.

As Johnson and Corbyn locked horns on live TV last night, the Twitter account belonging to the Conservative Party’s press office changed its display name from “CCHQ Press” to “factcheckUK,” replete with a new logo and header image. 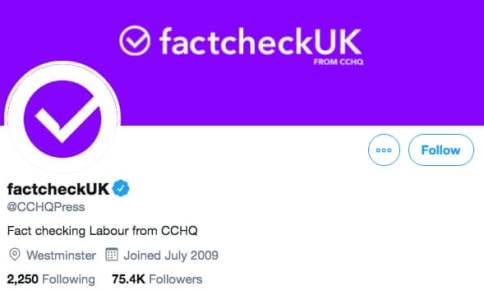 Throughout the TV debate, the CCHQ Press Twitter account tweeted statements of “fact” relating to the what was being said by the respective party leaders, under the “factcheckUK” moniker. 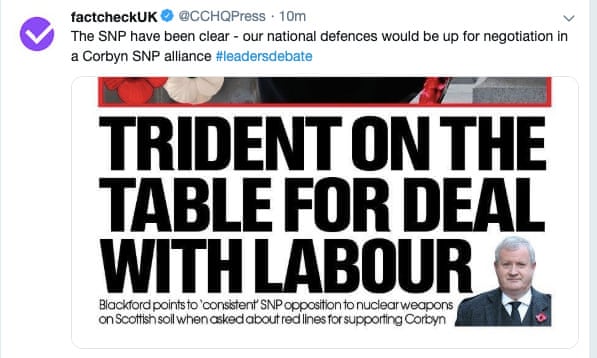 Above: A real fact-check service?

As incredulous complaints flooded the internet about what CCHQ was doing, some defenders argued that it was clear the tweets were actually from CCHQ, given the Twitter handle. However, the truth is that most people in the U.K. are not familiar with the “CCHQPress” or “CCHQ” brand — it has no obvious connection to the Conservative Party. So when a blue tick-powered “fact-checked” message flies around the internet, the casual observer may assume it originates from an official fact-checking service.

There are other factors worth considering here, too, beyond what political parties should or shouldn’t be allowed to do online. It has been argued that the Conservative Party’s stunt is likely part of a broader strategy to increase social engagement. In other words, they’re doing it badly on purpose.

Indeed, the Conservative Party is investing big in its online campaigns, an effort that has included seemingly naive posts with statements written in Comic Sans font. 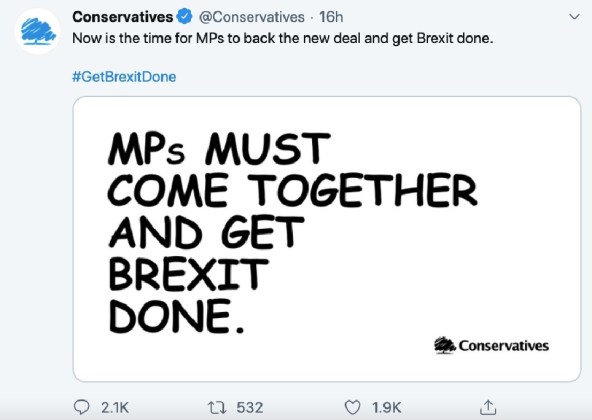 Above: Comic Sans for engagement

Naturally, this leads a lot of people to reshare the post for the purposes of lampooning or criticizing it. But all it really does is amplify the message and warm up the Twitter algorithm so that subsequent tweets may be featured more prominently in people’s timelines.

Translated to the latest fake fact-checking stunt, engagement may be all that matters as far as Twitter’s algorithms — and the Conservative party’s agenda — are concerned.

CCHQ’s maneuver may not have had a significant impact on its own, but the sheer brazenness of the stunt stands out. And it demonstrates that political parties are increasingly empowered to do or say what they wish online — with no consequences.

Twitter does have policies in place to deal with this kind of activity, but it seems happy to ignore them. At the top of its Verified Account FAQs, the company notes that it explicitly prohibits “intentionally misleading people on Twitter by changing one’s display name or bio.” But it doesn’t say that it will remove the verified status of such accounts, it merely reserves the right to do so.

Moreover, the broader Twitter rules and policies state specifically that users: “… may not impersonate individuals, groups, or organizations in a manner that is intended to or does mislead, confuse, or deceive others.”

At the time of writing, the CCHQ Twitter account is still online, replete with its blue badge of honor.

There are echoes here of the recent brouhaha over false advertisements paid for by Donald Trump to promote unfounded claims about rival Joe Biden. CNN refused to run the campaign on the basis that the claims were “demonstrably false,” but the same ads ran just fine on Facebook, Twitter, and YouTube. Facebook had previously sparked controversy when it revealed that it would exclude political advertising from its fact-checking program, and Twitter later capitalized on this fallout by stating that it would soon ban political advertising altogether, circumventing any controversy over whether it should fact-check political ads.

Yesterday, Snap CEO Evan Spiegel waded into the debate by confirming that Snap has a team dedicated to vetting political advertisements for false claims.

The main difference with the controversy that hit Twitter in the U.K. last night was that it didn’t involve advertisements, political or otherwise. It was a simple Twitter profile page rebrand lasting just a few hours — one that contravened perfectly good existing policies, but with no consequences.

The phenomenon of political entities presenting falsehoods or other misleading information on social media is hardly new, but it’s clear that many are now pushing the boundaries to their very limits. Perhaps more importantly here, they’re no longer even trying to pretend otherwise.