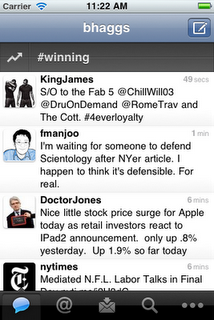 Twitter announced today that it’s eliminating a feature that has received some loud criticism — the QuickBar, a bar at the top of Twitter’s iPhone app showing trending topics.

After the feature was introduced earlier this month, I started seeing lots of complaints (on Twitter, naturally) about how ugly and intrusive it was. Blogger John Gruber said he was staying with an older version of the app to avoid the QuickBar, and he wasn’t the only one. Gruber also dubbed it the “#dickbar”, a term that caught on with other users. (Personally, I didn’t feel the same annoyance, but that’s only because I learned to pretend the QuickBar wasn’t there.)

So in a new blog post, Twitter said it has removed the QuickBar from the latest version of the app. The post is pretty coy about the criticism, saying only, “After testing a feature and evaluating its merits, if we learn it doesn’t improve the user experience or serve our mission, we’ll remove that feature.” It’s a pretty indirect way of admitting that the QuickBar didn’t pan out, especially since the next paragraph goes on to praise its “incredibly high usage metrics.”

In a tweet, chief executive Dick Costolo offers a little more detail, saying, “the engagement data is through the roof but we ultimately agree trends are ‘too far away’ and out of context in that position”.

Speaking of Costolo, Gruber said he came up with the dickbar name because he thought the feature was a “dick move”, but he admitted it was doubly appropriate to associate the bar with Twitter’s CEO (in part because the QuickBar seemed like a way to force advertising on users). The feature’s removal comes a few days after Twitter creator Jack Dorsey returned to a more active role at the company as the executive chairman in charge of product, so he may deserve credit for the move.

Not that the QuickBar is completely dead. Twitter says:

We believe there are still significant benefits to increasing awareness of what’s happening outside the home timeline. … For now, we’re going back to the drawing board to explore the best possible experience for in-app notification and discovery.