Uber is pushing its appeal to globetrotters with the expansion of UberEnglish, the service that lets riders request drivers who are proficient in the English language.

The trial service kicked off in partnership with language-learning platform Duolingo in Colombia last year, and today the rollout continues with the launch in Rio de Janeiro, Brazil’s second largest city and sixth biggest in the Americas. 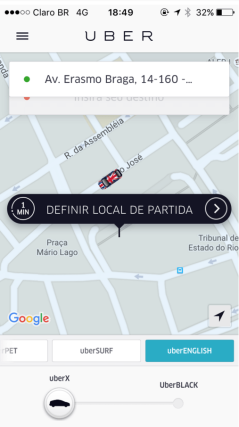 Timed to coincide with the start of the world-famous Rio Carnival, which kicks off on February 5, those located in Rio will see an “UberEnglish” option when requesting a ride through the mobile app. But the timing of the launch is also notable due to another major international event, this one taking place this August in Rio — the 2016 Olympic games.

Backed by bucketloads of investors’ cash, Uber’s mission is to be the de facto etaxi app of choice not only domestically, but when its users touch down in foreign lands. And given that English is the lingua franca for many travelers, it makes sense for Uber to focus on offering English-speaking drivers to those who require it. Perhaps more importantly, this also gives Uber a distinct advantage over local competitors such as Easy Taxi — incremental features such as drivers’ linguistic skills could serve as a major differentiator in the long run.

Founded in 2011, Duolingo offers a number of services to help people to learn to read, listen, and speak a new language. The Pittsburgh-based startup with more than 100 million users offers a language proficiency center, and this is what Uber is using to verify the linguistic skills of its Brazilian drivers. The Duolingo Test Center lets anyone become certified as “proficient” in a given language within 20 minutes, at a cost of $20.

While the Duolingo-certified drivers will be limited to Colombia and Brazil for now, more Latin American countries will get the UberEnglish treatment shortly — probably Mexico and Costa Rica to begin with. For the Rio launch, we’re told that 1,400 English-speaking drivers have already signed up.

Elsewhere, Uber previously introduced an UberEnglish offering in Shanghai, but the company itself interviewed and hand-picked the drivers with the best English skills, meaning it was hard to scale. Uber also offers an UberEspañol service in key U.S. cities for those seeking a Spanish-speaking driver, but again this doesn’t use the Duolingo certification method.