Uber is releasing a new developer tool aimed at making it easier to incorporate its service into third-party apps. Starting today, the company is making available an official Uber Ride Request Button. Any app can now easily incorporate this client-side mechanism that, when tapped, will request an Uber to take you to your destination.

Available for both iOS and Android apps, this Uber button is free and provides an easy and less programmatic way to incorporate the ride-hailing feature. Developers need to register their app on the company’s site, download and install the appropriate SDK, and then configure and display the Ride Request button next to each address field in their app. From there, the experience is deep-linked into a user’s Uber app account with the ride pre-configured. 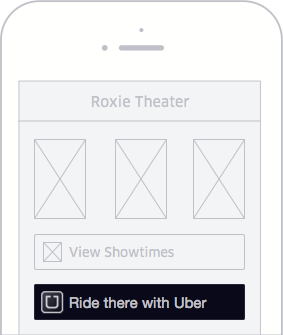 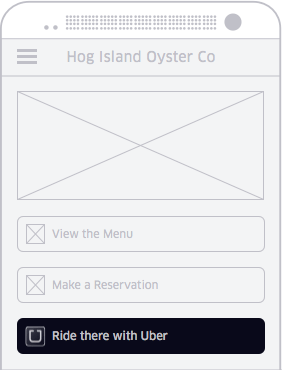 In 2014, Uber started working with third-party developers when it opened up its public API. Spokesperson Nairi Hourdajian told VentureBeat at the time that with its introduction, the company was bringing the “Uber mobile experience to every mobile app.” But while an API allowed users to tap into its service, and there have been a few notable instances, the problem was always about turnaround time. This new Uber button accelerates things and decreases the development time needed.

So what kinds of things will this updated capability make possible? You could at some point find that when you’re buying a concert ticket on Fandango or Eventbrite that you’ll be able to tap the Uber button and a car will arrive that knows where to take you. Or perhaps Virgin America or some customer service-oriented travel service could enable travelers to easily summon an Uber “shuttle” to pick them up to take them to the airport.

Third-party services will find it easier to get a value-add service that could convince customers they’re a better choice than competitors. Partners like, say, Hilton, Fandango, tourism bureaus, concierge services, sports entertainment complexes, and others could use it to their advantage and maybe strike deals with Uber to sell more rides.

Ultimately, Uber is going to extend its reach across a number of apps that could grow exponentially through the use of this button. Not only will the number of new users likely increase, but the insight that Uber will receive through third-party apps could prove beneficial.

Uber’s Ride Request Button certainly represents a big leap for the on-demand car service. It will help show scalability, while also putting Uber ahead of competitors like Lyft, which interestingly enough has not formed a deep partnership with developers, although it has made some deals with the likes of Starbucks and Slack.

This is the latest effort by Uber to court developers. It previously rolled out Ride Reminders that would let third-party apps send push notifications to a user’s device, letting them know a ride was on its way. It also publicly released its API in China, a promising market for the company and one fraught with competitors, including Didi Chuxing, which has formed a partnership with Lyft.