Uber continues to be the transportation service of choice for business travelers, making up 52 percent of all expenses in Q4, according to a study by Certify. The online travel and expense management service provider today claimed Uber received the majority share of ground transportation, compared to 40 percent the same quarter in 2015. Additionally, the private on-demand ride hailing service was the most-expensed service in 2016.

By comparison, Lyft was the least-preferred service last quarter, garnering just 4 percent, an increase of 2 percent from the same time in 2015, out of all business receipts. It fell behind not only its direct competitors, but also car rentals (33 percent) and taxis (11 percent). However, Certify notes that Lyft increased its market share in 2016 faster than Uber — 551 percent versus 254 percent, respectively. 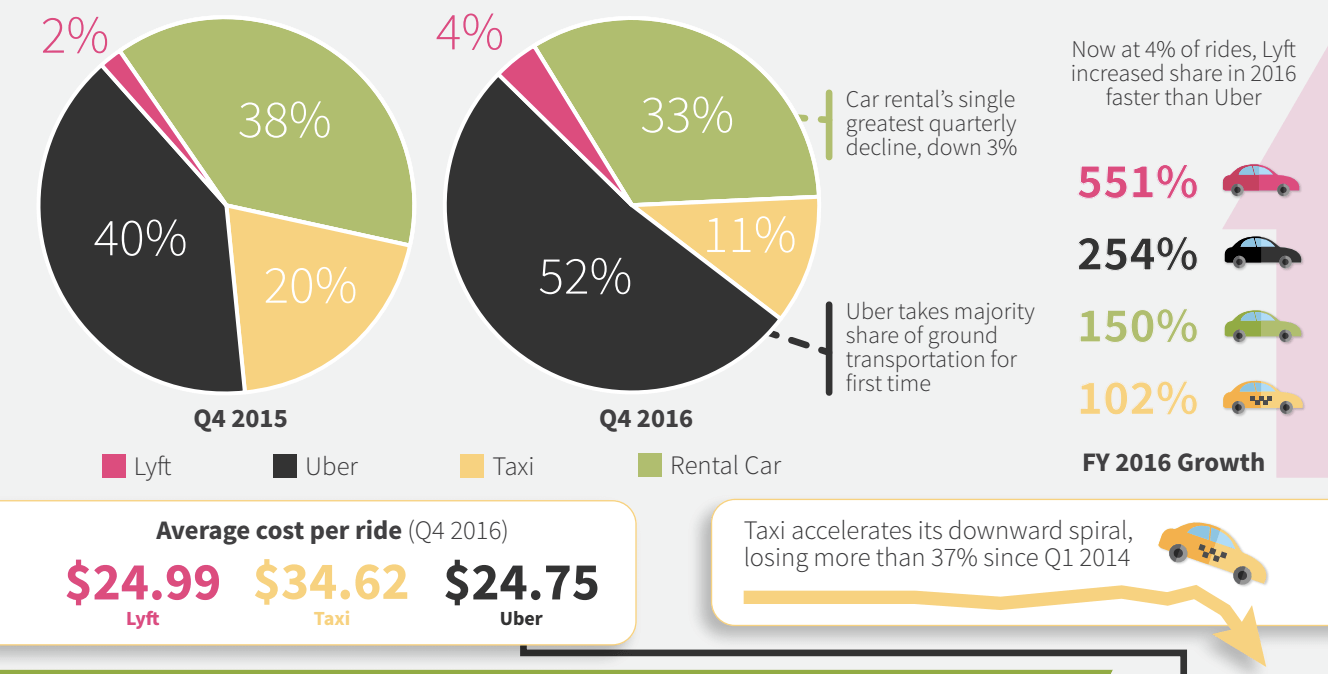 Above: Uber usage continues to dominate in ground transportation among business travelers.

As the so-called sharing economy continues to flourish, even amid some regulatory issues, Uber is continuing to play a big part. According to Certify’s data, in the first quarter, 43.4 percent of expensed rides were in an Uber, which jumped to an astonishing 72.53 percent in Q2 and 75 percent in Q3, finishing at 52 percent in Q4. However, these percentages are a bit misleading because they are not all based on the same factors — some cover Lyft, Uber, and taxis, while others included car rentals. But what appears consistent across Certify’s studies is that — regardless of the percentages — Uber surpasses any mode of ground transportation for business travel.

Uber also took top honors for having the cheapest average cost per ride, coming in at $24.75, while Lyft was slightly higher at $24.99. Cab rides were priced at $34.62. And speaking of taxis, Certify reported that usage by business travelers has dropped more than 37 percent since Q1 2014. 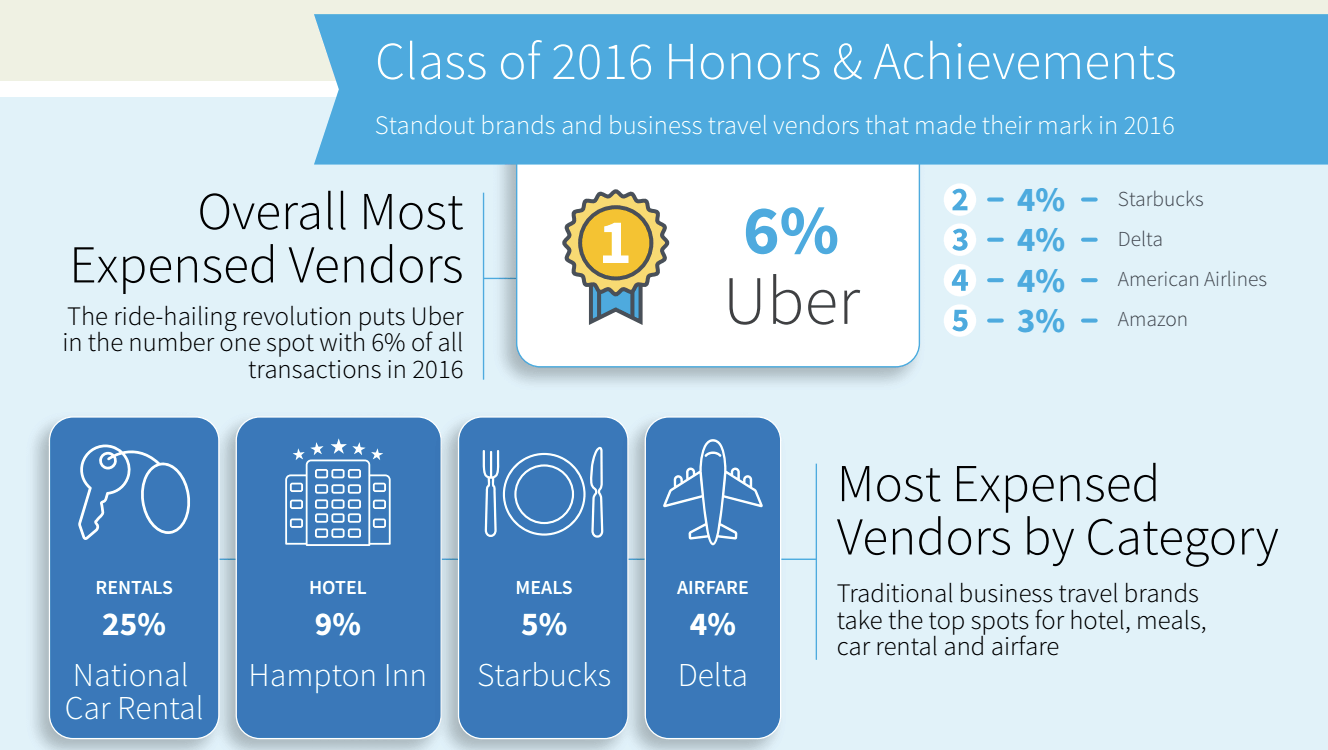 Above: A Certify study states Uber made up 6% of all business travel receipts in 2016.

It’s definitely not surprising to see Uber and Lyft’s continued interest in business users. Both services have courted this demographic for a while, since it’s likely to be a source of frequent riders, compared to those using the service for personal purposes. From special profiles to integrations with expense services such as Concur to enabling riders to use pretax commuter benefits, Uber and Lyft are seeking to make it simple for business people to get from point A to B.

However, one thing missing from Certify’s data is a better understanding of why Uber has beaten Lyft out quarter after quarter. It may be because Uber is more widely available than Lyft, although the latter announced that it will launch in 40 new cities this week. 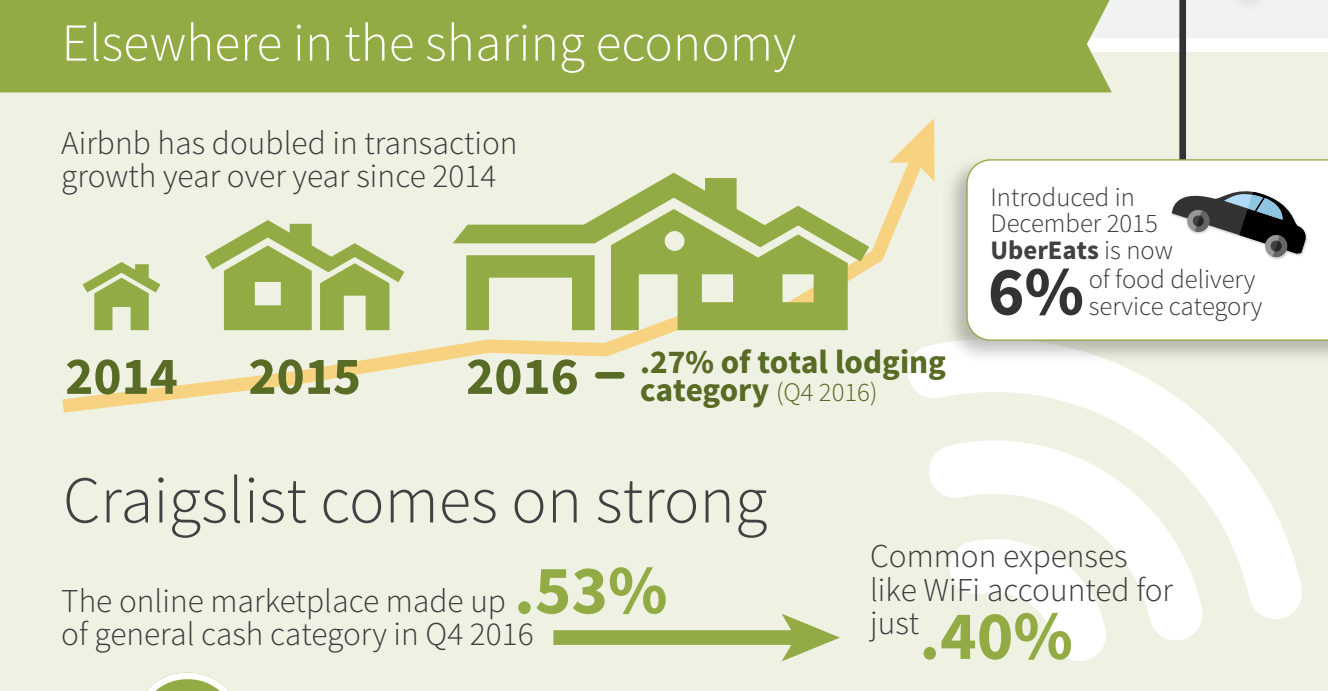 Above: How other sharing economy companies fared in Q4 2016 among business travelers.

Other shared economy companies are also seeing an increase in activity. Airbnb is said to have seen a 200 percent increase in transactions since 2014, and in Q4 made up 0.27 percent of the total lodging category. The on-demand accommodation rental provider has been gradually boosting its appeal to business travelers, launching a way to easily book a stay through assistants, teaming with Concur, introducing a certification for “business travel ready” listings, and letting guests make reservations using American Express Rewards points.

Certify said that although Airbnb only made up 0.27 percent of lodging, it’s still a significant share. While the top 15 hotels by expense percentages are between 1.18 percent and 8.82 percent, it’s believed that Airbnb could make it into this list “later this year.” In looking at average room nights, Certify said business travelers stayed longer in Airbnbs than in traditional hotels, 4.51 versus 2.58 nights, respectively.

Craigslist is mentioned for the first time and made up 0.53 percent of Certify’s “general cash category” in Q4.