Social media monitoring firm Synthesio said that 35.6 percent of users talking about CES mentioned UltraHD televisions, or those that have four times as many pixels as high-definition TVs. Also known as 4K TVs, UltraHD emerged a few years ago, and prices for the cheapest models fell to $1,000 during the holiday shopping season. An UltraHD TV has a resolution of 3840 pixels × 2160 lines, compared with high-definition, or HD TVs, with a resolution of 1920 pixels by 1080 lines. That difference means there are four times as many dots, or pixels, on the screen in an UltraHD TV, resulting in a sharper and more vibrant picture.

At CES, TV makers like Samsung announced big lineups of new UltraHD TVs, and Samsung went further with SUHD TVs, which have even better resolution. Surveys such as those by Synthesio are interesting because they show the top emerging trends at the gigantic trade show, which covered more than 2.2 million square feet of exhibit space and drew 170,000 attendees.

“With all of the buzz that drones and wearable technology had in the media heading into CES, it was quite interesting to see what consumers and those at CES are actually interested in and impressed by,” said Leah Pope, vice president of global marketing for Synthesio, in a statement. “The future of home entertainment was surprisingly the leading conversation around CES. This means that while consumers love to have the newest mobile gadgets on them at all times, the technology in their homes is still important to them.”

After UltraHD, wearable technology came in at 29.6 percent of online conversations. The Internet of Things was 19.4 percent, drones were 7.8 percent, virtual reality was 6.4 percent, phablets were 0.6 percent, and 3D printing was 0.4 percent. 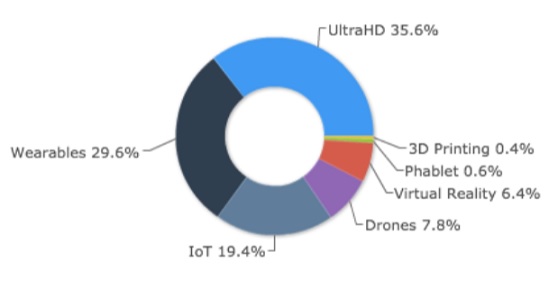 Above: Synthesio measured the top conversations at CES.

Synthesio has been analyzing all global conversations surrounding CES on social media platforms, blogs, and forums since CES began.

“People are focusing their technology needs on innovations that will make their lives both better and easier,” Pope said. “UltraHD was presumably the most talked about topic, as it improves their home entertainment and in turn their home lives. People are then interested in wearable technology and the Internet of Things, both of which provide technology that helps improve, and perhaps more importantly facilitate efficiency in our day-to-day lives. ”

Synthesio said that 72 percent of all conversations involved men, while only 28 percent involved females. About 97.1 percent of the conversations mentioned were held in English. That’s interesting, considering 45,000 of the attendees were from other countries. Synthesio monitors online conversations across social media platforms, review sites, forums, blogs and the comment sections of newspapers, in 50 languages and 200 countries.