The Navy’s latest recruit is … smart glasses, as the U.S. military’s maritime arm has cut a deal to do research with Vuzix to create tech that works with naval applications.

The Rochester, N.Y.-based Vuzix said today it has been awarded $75,000 and $680,000 grants from the U.S. Office of Naval Research to integrate Google Glass-like, see-through optics into a standard pair of goggles. The idea is to superimpose computer-generated information on a person’s view of the real world. This also shows that smart glasses could be more than just a techie trend and have more real-world applications.

Vuzix will work with rugged military heads-up display-maker Six15 Technologies to integrate the technology into goggles. It will develope the tech in two phases, with a prototyping stage and then a field-deployable stage with larger fields of view. The tech is supposed to help fulfill the training and simulation needs of the U.S. Navy. 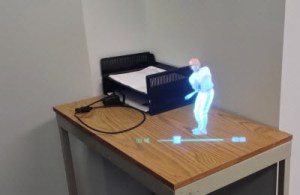 The Small Business Innovation Research award is designated for a head-worn display. The tech would enable augmented reality, or the capability to insert virtual computer-generated objects into a person’s field of view. It could place virtual characters, objects, and effects in the real world.

The Navy sees its potential to revolutionize training, but the head-worn display has to be comfortable enough to be worn like sunglasses for hours at a time without needing to be recharged. That’s because naval folks, especially in combat, will have much more demanding needs than consumers using smart glasses to look up reviews of a local restaurant.

Vuzix president Paul Travers said in a statement that the goal is to integrated advanced optical waveguides into Vuzix’s see-through optics technology so that high-definition displays can be incorporated into very thin lenses that are similar to normal eyeglasses. Vuzix already makes video eyewear and smart glasses for consumer, commercial, and entertainment products. Six15 is based in Henrietta, N.Y., and it makes rugged military equipment like thermal imagers and it resells Vuzix gear.