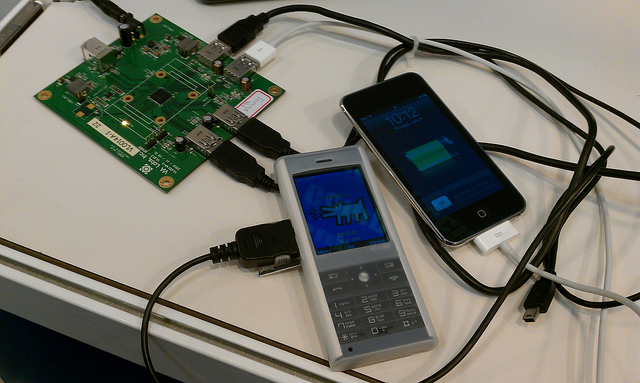 The high-speed USB 3.0 standard will finally make its way to smartphones and tablets by the end of 2012, the organization behind USB standard said at the Consumer Electronics Show on Sunday.

In the battle for the next major high-speed data port, USB 3.0 will be contending with the Thunderbolt standard on mobile devices — a fight that will spill over into the mobile arena. Intel has said that it will push Thunderbolt for smartphones and tablets later this year as well, and there are signs that Apple will include it in future iOS devices. Luckily for consumers, many PCs that are equipped with Thunderbolt ports also have USB 3.0.

The USB 3.0 ports will likely get a MicroUSB version, similar to to the smaller ports currently on many cellphones, according to Rahman Ismail, CTO of the USB Implementers Forum. They will achieve theoretical speeds of around 800 megabits per second, significantly faster than the current USB 2.0 standard, which has a theoretical maximum speed of 480 Mbps (but in reality, performs but much slower).

“What takes 15 minutes [with USB 2.0] will roughly take 1 minute and 10 seconds,” Ismail said.
He also noted that mobile devices won’t be able to use the full power of the USB 3.0 standard — which can achieve theoretical speeds of around 5 gigabits per second on computers — because it would require them to draw too much power.