User acquisition costs are on the rise again — as we recently predicted — this time cracking a significant milestone in the month of August. That’s going to spell bad news for small app makers who are trying so hard to get noticed among a sea of bigger competitors.

Mobile marketing firm Fiksu reported that the cost per loyal user index (which measures the cost to acquire users who open an app three or more times) rose to $4.04 in August, surpassing $4 for the first time for August. The figure is up 36 percent since last month and up 117 percent from a year ago.

Significant year-over-year growth occurred in both the App Store Competitive Index and the Cost Per Install Index (CPI), Fiksu said. August’s results reflect heightened activity across the mobile advertising ecosystem, indicating that deep pocketed advertisers are putting ever-larger shares of their budgets into mobile, trading higher costs for greater audience precision. The takeaway for advertisers is that spending smart is a necessity to get in front of the right mobile audiences, Fiksu said. 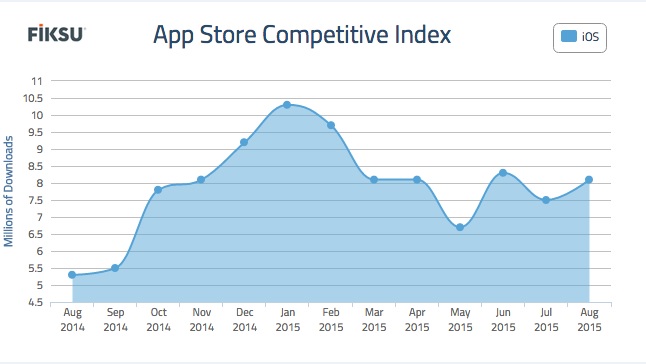 Above: The number of apps downloaded for the top 200 rose in August.

On the volume side, mobile app downloads also rose. As measured by the Fiksu App Store Competitive Index, which tracks the average aggregate daily downloads of the top 200 free iOS apps, app downloads increased by 8 percent since last month to 8.1 million.

This is a 53 percent increase since last year at this time.

“Consumer demand for mobile apps is insatiable,” said analyst Jeremy Kressmann in eMarketer’s App Marketing 2015 report, in a statement. “Smartphone and tablet users will spend more than three hours per day in-app combined in 2015 — more than three times the average time spent per day on the mobile web.”

The Cost Per Install Index (CPI) dropped slightly on iOS to $1.32, but showed a rise of 26 percent year-over-year. On Android, CPI fell to $1.91, decreasing 30 percent since last month, but increasing 103 percent from last year. The increase in Cost per Loyal user contrasted with the decreases in CPI shows that competition is ramping up for fall campaigns, but advertisers are struggling to get attention.

Fiksu said that may be because users remain in summer mode or perhaps because they’re simply using more apps, so loyalty to any one app is more difficult to establish. One challenge that we highlighted in our VB report on mobile user acquisition is that brand dollars are currently flooding mobile marketing in the run-up to the Christmas shopping season, reducing the availability of premium inventory.

“August demonstrates the reality of ever-increasing competition in the app marketing environment,” said Micah Adler, CEO of Fiksu, in a statement. “Increasing costs across the landscape are nothing new, but particularly with activity surrounding new iPhones, iPads, and iOS 9 launches, marketers better be prepared for those costs to continue at or near these record high levels. If not, marketers could become acutely aware of the challenges of not reaching the right audiences.”

Looking ahead to next month, marketers are concerned about the new ad blocking introduced in iOS 9. For the most part, this won’t have much impact on mobile marketers, given ad blocking is applicable solely to mobile web traffic, which only accounts for 10 percent of the time spent on mobile, and has no effect on in-app ads. However, ad blockers have been shooting to the top of the App Store charts, which shows the popularity of the concept with users, and their willingness to take extra steps to install them. 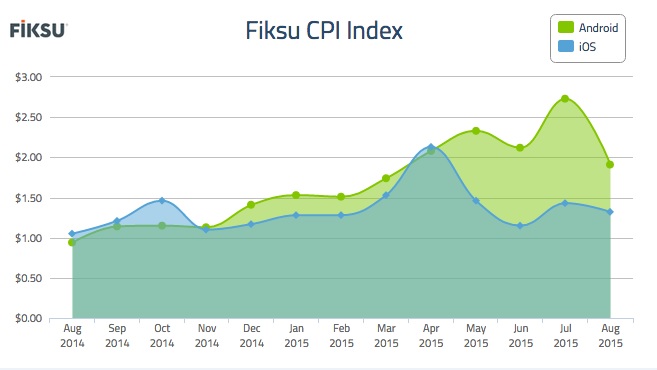 Above: The CPI for mobile user acquisition in August 2015 was steep.