Velti is on very thin ice.

The Nasdaq-listed ad network has had a rough few months. Since last year, its stock performance has been grim, closing at just $1.09 yesterday — a 93 percent drop from its peak in the summer of 2011. Its market capitalization, which was $800 million at the time of its IPO, has since dropped to just $73.44 million.

It gets worse. Not only was Velti cofounder and chief operating officer Chris Kaskavelis fired in March, but Velti also announced in May that it was laying off roughly 200 workers — a fifth of its staff. (Velti’s employees aren’t crazy about the company’s prospects either.)

The company’s income statement paints a similarly grim picture:  At the end of last year, Velti reported a net loss of $61.2 million. In the second quarter, the company pulled in $41 million — a 10 percent drop compared to last year. Sales projections for 2103 are $255-$280 million — a big cut from previous projections of 339 million.

Here’s how the descent looks to the stock market. 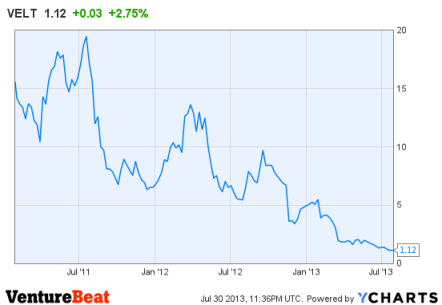 From the outside, Velti looks very much in trouble, and its issues are extending to the developers using its platforms.

“We first experienced delays last year,” König said in an email to VentureBeat. “We contacted them and they made their last payment on Feb 6, 2013 for revenues generated until July 2012. They have not made any payments since then.”

And König is not alone. A Google search for “Mobclix payments” returns over 30,600 results, many of which are complaints from people in situations very similar to König’s: Mobclix allegedly owes them money, and it’s not paying up (possibly because it doesn’t have the money, some muse). Some claims are as high as $350,000 and there’s even a whole site dedicated to complaints. Class action threats are brewing. (If you’re waiting on payments or have more insight, feel free to get in touch.)

Velti did not immediately return requests for comment on the payment situation.

Taken in light of the larger industry trends, Velti’s troubles are unsurprising. While Facebook has reported some impressive moves in mobile advertising, its success comes in part to the general detriment of the middlemen — the agencies and ad networks — who are being cut out of the deal between brands and the publishers. Some companies are taking their marketing efforts in-house, hurting companies like Velti further. Other advertising is going to the machines — via highly automated real-time bidding exchanges — cutting out higher cost advertising and marketing companies. Velti made a play in the automation area by buying Mobclix, however it is still losing money.

The trend was evident in this week’s merger between Omnicom and Publicis, two ad industry giants that have faced similar pressures from Google and Facebook.

“Facebook executed flawlessly after spending the second half of last year experimenting and looking at all the possibilities of making money in mobile,” Velti CMO Krishna Subramanian told us.

At the time we interviewed Subramanian, we hadn’t yet learned of Velti’s troubles in the stock market or the alleged payment issues with Mobclix, so we didn’t ask him about those issues. But in retrospect, it’s a telling statement about the ad environment.

Generally, if you’re not a giant tech company, it’s a tough time to be in mobile advertising. The scale of your network matters increasingly, and smaller players are likely to get gobbled up by bigger players that have resources to stay the course — something Velti is no doubt learning the hard way.