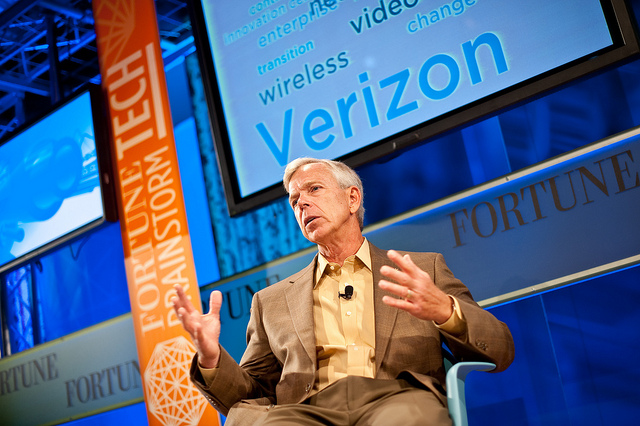 Of all the people to defend AT&T’s $39 billion purchase of T-Mobile, Verizon CEO Lowell McAdam comes as one of the biggest surprises.

Speaking at a Goldman Sachs investor conference on Wednesday, McAdam said the massive deal has to occur, unless the government can better focus on giving telecoms more wireless spectrum, according to the mobile site Boy Genius Report.

“I have taken the position that the AT&T merger with T-Mobile was kind of like gravity,” he told investors. “It had to occur, because you had … T-Mobile that had the spectrum but didn’t have the capital to build it out. AT&T needed the spectrum, they didn’t have it in order to take care of their customers, and so that match had to occur.”

McAdam went on to say that he has told the FCC that blocking the merger will harm American consumers. (Verizon Wireless is co-owned by Verizon and Vodafone.) The U.S. government filed papers to block the T-Mobile deal on August 31, saying that it would “substantially” reduce competition. Sprint followed up with its own lawsuit a few days later.

AT&T reiterated Wednesday that it’s seeking a “prompt trial” for the DOJ’s suit, Bloomberg reports. “We’re seeking a prompt trial because we’re very interested in closing this transaction,” AT&T attorney Mark Hansen said. “We need to have the cloud of uncertainty removed. We’re already a month beyond where we want to be.”

It’s interesting that Verizon’s CEO would be so gung-ho about letting his biggest rival become even more powerful. It could be a hint that Verizon Wireless wants to keep the door open to acquire Sprint. McAdam can’t trash talk the T-Mobile merger now when the company may need to convince regulators in a few years that it needs to purchase Sprint.